Behind The Numbers - Advanced Stats Game #23 Canucks vs. Panthers

Share All sharing options for: Behind The Numbers - Advanced Stats Game #23 Canucks vs. Panthers

Honorable Mention: Alex Burrows continues to be excellent in SCD since returning from injury. He also had two great passes to set up quality scoring chances. (One to Kassian and One to Richardson). And, Burrows was very dangerous all game.

And, for those worried Canuck fans, the team is really improving their possession numbers! In the last 7 games they have a ~57% Pos. F Close rating (144-103 in shot attempts).They now rank 6th in the league, at ~54% for the season, and they are 2nd in their division. This is the teams' highest ranking since 2011, when they were third. The short term issue is that possession numbers are only statistically significant with team wins over larger samples 25- 65 games are best.

To repeat, the Canucks still need to be able to finish more scoring chances - we are just waitin' for the luck to change! Voodoo dolls?! Anyone?!

Also, if you have any questions about advanced stats and would prefer to email me you can reach me at danthestatman1@gmail.com. I would be happy to try and answer them! I learned alot this way when I started! 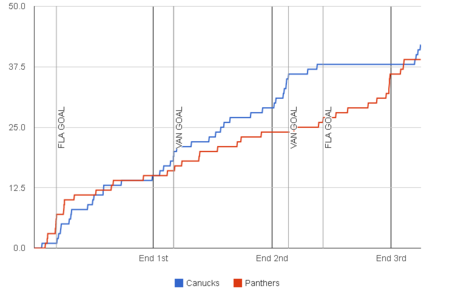