Behind The Numbers - Advanced Stats Game #22 Canucks vs. Stars

Share All sharing options for: Behind The Numbers - Advanced Stats Game #22 Canucks vs. Stars

And, for those worried Canuck fans, the team is really improving their possession numbers! In the last 6 games they have a ~58% Pos. F Close rating (123-90 in shot attempts).They now rank 6th in the league, at ~54% for the season, and they are 2nd in their division. This is the teams' highest ranking since 2011, when they were third. Of course, the Canucks still need to be able to finish more scoring chances - we are just waitin' for the luck to change! Voodoo dolls?! Anyone?! 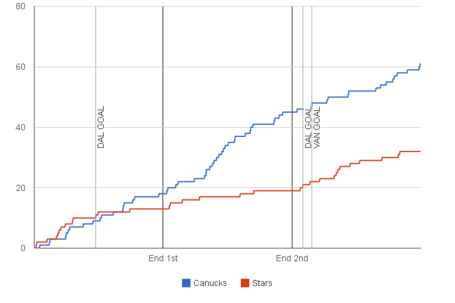