Canucks Play of the Week: Richardson scores his first Canucks goal in style!

The Canucks Play of the Week is a weekly feature that breaks down the best play from the past seven days. This week: Brad Richardson scores his first goal as a Canuck, on a momentum-shifting shorthanded breakaway against the Edmonton Oilers.

Share All sharing options for: Canucks Play of the Week: Richardson scores his first Canucks goal in style!

The Canucks Play of the Week is a weekly feature that breaks down the best play from the past seven days. This week: Brad Richardson scores his first goal as a Canuck, on a momentum-shifting shorthanded breakaway against the Edmonton Oilers. 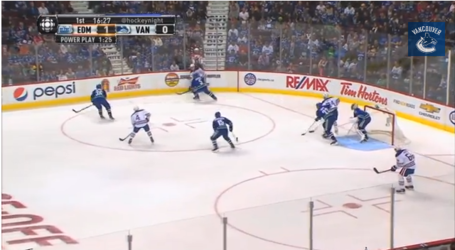 It's a real shame that Jannik Hansen did not get an assist on this play, because his hardwork on the PK makes it happen. Here, Hansen tips the pass to the point, slowing it down and giving him time to get to pressure the Oilers' pointman. 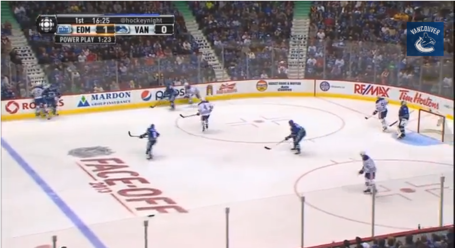 Hansen checks Ladislav Smid, forcing him to make a quick dump down the boards where Jason Garrison is waiting, having beat his man to the puck. The other Oilers pointman is deep in the Canucks zone (four Oilers are below the circles), leaving Richardson with loads of open ice to break out. 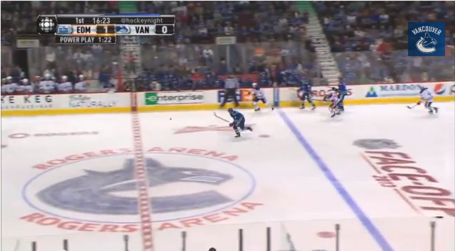 Garrison chips the puck out of the zone and Richardson is off to the races, with a clean breakaway from the red line onward. 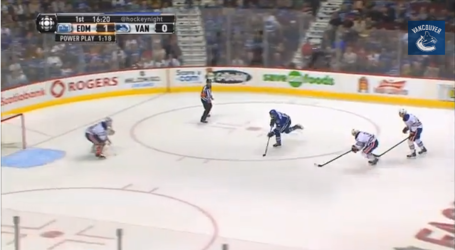 Richardson does a nice little fake on Dubnyk, even kicking his leg back in his best Alex Burrows impression! Dubnyk is well out of the net and in good position to make the save. 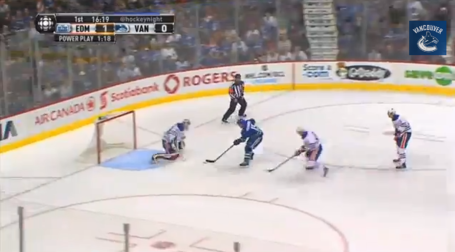 Instead of shooting, Richardson goes for the deke - but midway through, as Dubnyk's legs are slightly open, he slips the puck through the five-hole. It was actually a pretty nifty shot and definitely one that Dubnyk was not expecting. 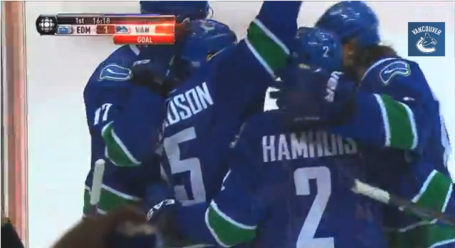 Well, the first week of the season is in the books! After a rough start against new Pacific Division rival San Jose, the Canucks beat up on familiar ex-Northwest foes Edmonton and Calgary (and yes, I realize that at one point all four of these teams were in the Smythe Division!). So the Canucks are 2-1, and have been looking pretty good on offense so far. Early days, yes, but not too early for a Play of the Week!

I hate to start with an honourable mention,* but let's face it - this goal by Daniel Sedin vs. Edmonton was far prettier than Richardson's:

That being said, Daniel's goal made the score 4-1 for the Canucks and put them well on their to a blowout win. Richardson's goal came at a crucial time for the Canucks. Roberto Luongo had given up a weak goal to Jeff Petry just two minutes into the game, and a minute later Kevin Beiksa went to the box and the Oilers went to the powerplay. A goal by Edmonton on this powerplay would have brought back bad memories of last year's 4-0 loss to the Oilers, when Edmonton stormed out of the gate and scored four goals before eight minutes had elapsed. Given their top-end talent, Edmonton can be a scary team when they have momentum.

Thankfully, instead of capitalizing on the powerplay, the Oilers botched it and allowed Richardson's breakaway - on which he made no mistake. The goal leveled the game and halted any early Oilers momentum, setting the stage for the Canucks' offense to take over the game and seal the win.

It was Richardson's first goal with the Canucks, and it was a hell of a way to make an introduction. Welcome to the club, Brad, and let's hope we see more of that hustle and slick moves as the season continues!

*Mike Santorelli also deserves an honourable mention for his OT winner against the Flames.