Canucks Play of the Week: Luongo stones Sutter on a late-game penalty shot

The Canucks Play of the Week is a weekly feature that breaks down the best play from the past seven days. This week: with less than two minutes left in regulation time, Roberto Luongo stops Brandon Sutter on a penalty shot to preserve a point against the Penguins.

Share All sharing options for: Canucks Play of the Week: Luongo stones Sutter on a late-game penalty shot 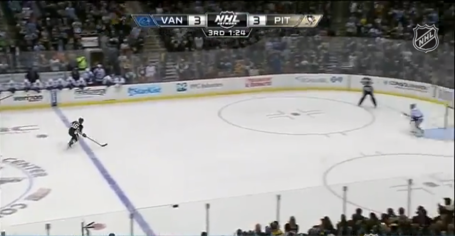 Sutter cuts slightly to his left, so that he can get Luongo moving left-to-right as he shoots. Luongo starts out of his crease to take away the angle. 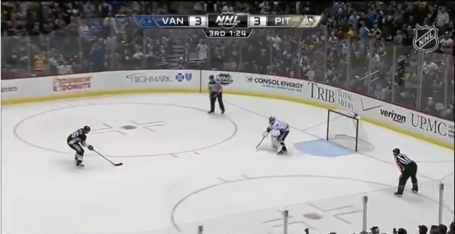 As Sutter bears down, Luongo is well out of his to cut down the angle and is in good position to react to a shot. There's not too much to shoot at, so Sutter's best bet is probably to deke here and hope to catch Luongo out of position as he backs into his net... 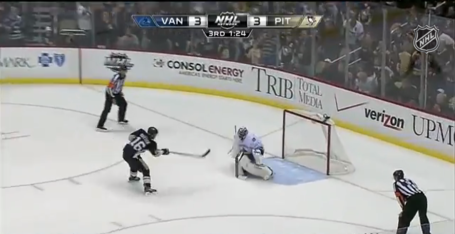 ... but Sutter instead tries the shot, and Luongo makes the save with ease. It's pretty difficulty to beat a goalie, especially one of Luongo's size, on a straight shot when he is cutting down the angle so well. Maybe Sutter was hoping to catch Luongo dropping to his knees and puck the corner - if so, he failed at this attempt. While not the most spectacular save, this was an excellently played penalty shot by Luongo from a technical standpoint and as a result he made the save look easy.

Usually the POTW showcases a pretty or important goal - it's just the nature of determining which plays stick out in a given week that goals will dominate. This week, however, I want to give some love to our goalie, Roberto Luongo - for a save he made in a loss, no less.

Aside from obviously preventing a goal on a high-percentage scoring opportunity, why was this penalty shot so significant? Well, for starters it came with just 1:24 remaining in the third period of a 3-3 tie. If Sutter scores here, the Penguins almost certainly win the game in regulation and the Canucks earn no points. This save gave the Canucks a chance to play overtime and, while they couldn't get it done in a shootout, to at least earn a loser point. It might not seem like much now, but if the Canucks are in a tight race for a playoff spot or division crown in April, this point could loom very large.

It is also worth noting that this is Luongo's second save on a penalty shot this season, having previously stoned Max Pacioretty of the Montreal Canadiens. For a goalie who is not know to be particularly strong in shootouts, this is an encouraging sign - as was his performance in the eventual shootout, where he stopped shootout wizard Jussi Jokinen and superstar Sidney Crosby before finally being beaten on a ridiculous move by Evgeni Malkin. If Luongo can continue to be strong in the shootout the Canucks should be able to pick up a few extra - and valuable - points throughout the season.