Canucks Play of the Week: Edler's "Swede" tying goal vs. the Devils

The Canucks Play of the Week is a weekly feature that breaks down the best play from the past seven days. This week: Alex Edler scores the game tying goal against former teammate Cory Schneider of the Devils, allowing the Canucks to win in OT.

Share All sharing options for: Canucks Play of the Week: Edler's "Swede" tying goal vs. the Devils 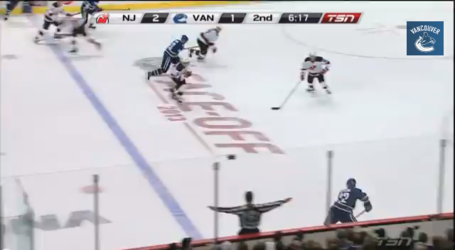 The Canucks break into the zone after a Henrik Sedin pass to Daniel. It is hard to see in this screen shot, but the Devils' Ryane Clowe is hobbling to the bench after very painfully blocking a shot - he's the Devils player in the top left skating completely the wrong way to where he should be going. Clowe's injury created a temporary odd-man situation that the Sedins and Edler exploited perfectly. 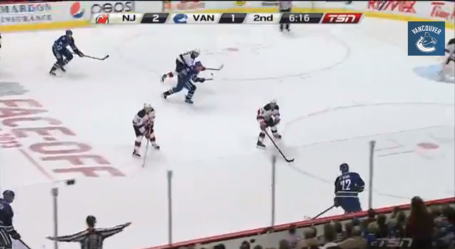 As Henrik drives to the net, Edler pinches aggressively from the point. With no Clowe on the ice, there is no Devil to cover him. Something I love about the Sedins - and am noticing more as I do these breakdowns - is how much opportunity and space they create for other players by drawing the attention of defenders. This is something that Wayne Gretzky was legendary for, and while the Sedins are obviously not at his level, they are very good at attracting defenders' attention and drawing them away from other Canucks players. Look here at how the Devils are playing Daniel - two defenders, while in quite good position, are totally transfixed by Sedin, leaving him with multiple passing options. There are better examples of this trend in games, but I thought it was worth mentioning here. 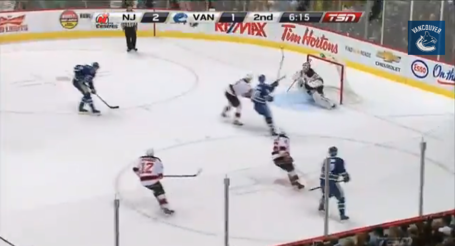 Daniel puts a cross-ice pass over to the streaking Edler, but the pass is slightly behind the defender. "No problem," says Edler, "I've got this anyway." Here, Edler takes the pass off his skate and directs it to his stick. At speed. This is a pretty remarkable play. 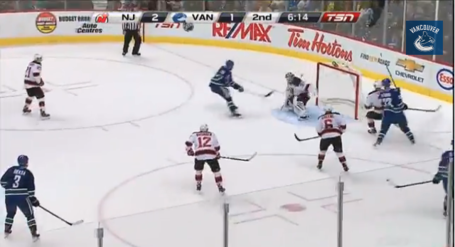 In tight against Schneider, Edler pulls a nifty move to force the goalie to respect his backhand, before pulling it forehand and roofing it into the net. Sweet goal by the Canucks blueliner.

The Canucks' game vs the Devils was all about one storyline: the return of Cory Schneider to Vancouver after the roiling goaltending controversy of the last few seasons. However, as with most games that are hyped with narrative significance, there were still two points at stake and the storyline ultimately became marginal to the on-ice action. In a poor week results-wise (1-2-0), the Devils game was the only one in which the Canucks earned points. They did so after spotting the Devils a 2-0 lead, and then clawing back to tie it on Edler's goal before Jason Garrison won the game in overtime. Edler's goal was the prettiest of the bunch by far, and stands as the game-tying goal. It therefore takes POTW honours this week.