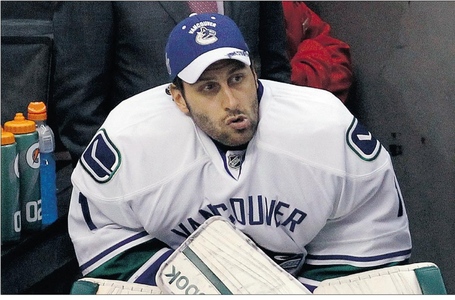 So I don't know about you, but I've thought about it a bit, I don't know if it makes much sense to keep both Luongo and Schneider on the same NHL team any more, but that's just me.

Which leads me to thinking what's gonna happen? The story keeps twisting and turning, and I think we should all make known our prediction for the purposes of internet posterity. Winner gets like a hat or something from Sean. Maybe a pair of socks or some diapers, I dunno. You can negotiate with him.

So here's how it goes. In the comments below:

1.Pick the team Luongo plays for next year.

2. As a tie-breaker, if (a) you are predicting a trade, pick a player or asset that the Canucks get in return, or (b) you think he does NOT get traded, pick how many games he plays for the Canucks this year.

3. If there is a trade and the Canucks receive multiple assets in return, the tiebreaker will be picking the asset deemed most important.

4. If multiple people make the same prediction, the first person to have made it is the winner.

Contest entries can be made until the day before the season starts or 1 hour prior to the moment a report is made that a trade has occurred that turns out to be accurate.

Just to keep a running tally, please also fill out the poll to see where our collective thoughts are:

This season Roberto Luongo will play for...