As A Reminder, These Are Your Top Six Forwards

Isn't it the worst when you forget that guy's name and suddenly you're at some party and he's in front of you saying hello? Let's avoid that embarrassment.

Share All sharing options for: As A Reminder, These Are Your Top Six Forwards

As we wait for this Roberto Luongo saga to end with a one way ticket to the Maple Leafs (or Panthers...or Flyers...or who the hell cares at this point just give us ALL YOUR PROSPECTS NOW), let's turn our attention to what awaits us when camp opens.

Here's a quick rundown of our top six forwards as based on last season (and ignoring injuries) before the 2013 camp battles unfold and blow it all up (Zack Kassian on the first line, Jordan Schroeder or some other center filling in for Kesler, etc). 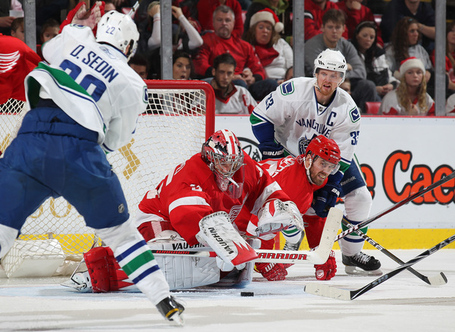 Pros: Genetic anomalies give them super powers. Collectively generate the lion's share of the team's offensive production. Both have Art Ross awards but those obviously don't mean a damn thing. They own just about every offensive record in franchise history that Markus Naslund, Trevor Linden and Stan Smyl were too lazy to hold on to. Sublime dancers. Their last name is reportedly not Swedish for "punch me or headlock me in a scrum."

Cons: They're like super old. Almost dead really. Henrik doesn't score because he never learned how to shoot. Daniel doesn't pass because sharing sucks and the spotlight cast down on him when scoring at home is, oh, so warm. Hank took the second most penalties per 60 minutes last season because hooking is fun (seriously, give it a try). Daniel took the most offensive zone starts in the league last year because otherwise AV will never see his kidnapped daughter again. Opposing fans call them sisters because that's what unleashing Dane Cook on a population does to humor. 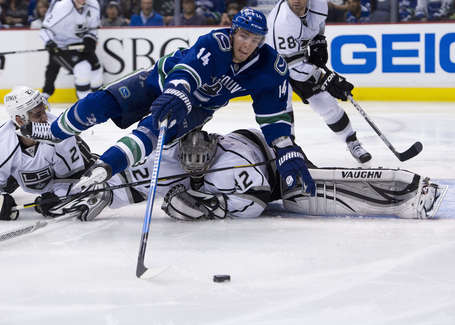 Pros: He's Mr. Everything and the Third Sedin. Lead all forwards in game winners (7) and best shooting percentage (14.1%) from last season with a minimum of 20 games played because who cares about those other < 20 slobs. Was the International Ball Hockey Player of the Year in 2005 because of course he was. Runs the Kelly Backes fan club (current population: 2). Is widely respected for his gentlemanly behavior in areas as remote as Edmonton, Boston and something called Chicago (shih-KAH-go). Stéphane Auger and Chris Campoli send him OKCupid emails all the time because bromance is forever.

Cons: This man has no cons and I'm offended you'd even think one existed. Jerk. 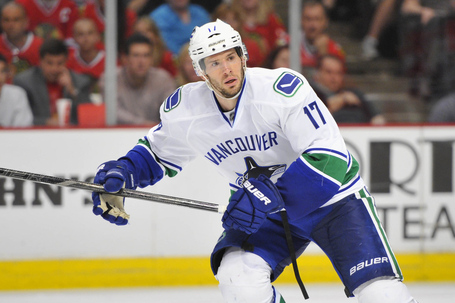 Pros: Second line magician. Habitually flirts with the Selke. Annoys everyone. Has interesting medical bills thanks to Chris Pronger and Jesse Boulerice. Active in the You Can Play campaign. Looks better naked than you do. GO BUY STUFF.

Cons: Currently broken. Favorite team growing up was the Minnesota North Stars. Known to dive but only does it because it looks funny and he cares about your blood pressure. 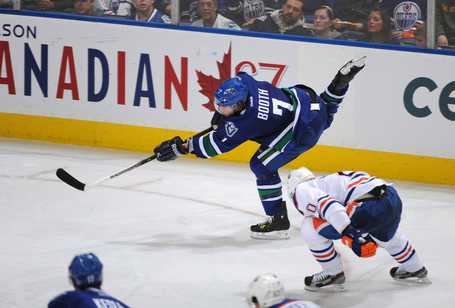 Pros: He's the team's lone power forward (whatever that means). He mercifully pushed Mason Raymond out of the top six (trollolololol). Scored his first Vancouver goal against Cory Crawford because that's how you make Vancouver fall in the love with you. Like any decent adult he loathes Mike Richards and Kevin Porter. Probably the only guy in Vancouver's top six who is willing to do this. He made us forget the Marco Sturm era. Is slighted for consistency problems before you realize most hockey players "suck" at roughly - if not slightly below - the same degree.

Cons: He might shoot you. He'll probably shoot you. Fuck he just shot me. 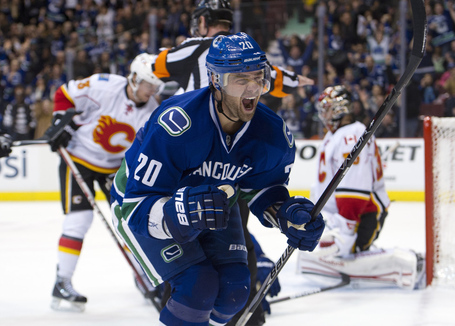 Pros: Versatile and hard working. Can play anywhere you ask him provided you ask nice and bring cookies. Lead forwards with the best snapshot shooting percentage (11.1%) because his wrist are delightful. Was 2012's unsung hero (that's the Fred J. Hume Award; don't act like you knew that) as decided by the sexy Canuck nation of voters and ballot stuffers. Was part of that lovely trade from the Rangers to Calgary for Olli Jokinen that came back to bite the Rags in the ass at just the right time. Would trade places with Derek Jeter for a day because he's not certifiable. He made us forget the Evan Oberg era. Has better abs than your entire lineage.

Cons: Has a curious love of staph infections.

Coming soon: the lovable scamps on the 3rd/4th lines