Back To The "Best Game Around"

After an self enforced hiatus, its time to somewhat forgive and who are we kidding, forget. So, with a fond probable farewell to a favorite player, and some unsolicited advice for the stewards of the "Best Game Around", lets get back to work.

Share All sharing options for: Back To The "Best Game Around" 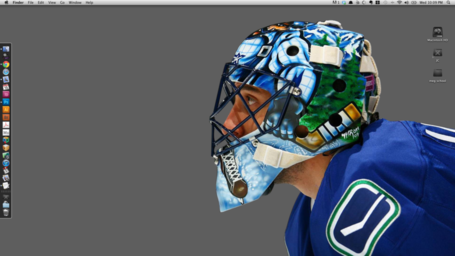 As we bid goodbye to another self inflicted wound on our favorite, and the best team sport ( though, the NFL was and is especially good this year. Go Hawks. And if the refs didn't totally suck and just feel like they are "messing" with the game, that NBA might have something! ) ...with once again another big market team screwing over the Canucks on their way to a rightly won and god damnit when is it going to be our effing turn... losing their chance to totally capitalize on a Stanley Cup win, what next? We'll get there in a sec, but first...

Well, first, a certain segment of the Canuck Nation ( fellow adherents to the First Church of Luongod ) will have to change their laptop backgrounds. Let me be the first to tell you that I will enjoy staying a fan of Roberto Luongo, even if its to the ( gasp ) Maple Leafs. In fact, I find it slightly ironic that the most likely team to acquire the affable Italian (I hope the first thing he does in T.O is comes out as Stombone1 ) is not only the one with a huge fanbase that includes the most ardent of the "well, he only won a Go;d Medal because..." or the "See? The guy's a loser, he only won 15 games in the 2011 Final...". You get the drift.

I have found the, what I like to call, "reluctant coronation" of Luongo in that city and the other ( some of the smarter Oiler fans, the surprisingly smart desire of the Blackhawk fans and others ) places where fans look at their goaltender's Cap hit and stats, then look down the list on the former and up the list on the latter for Roberto. ( Now that you want him on your team, he doesn't look so bad as when he is a hated Canuck, huh? )

Yeah. He's signed for a long time, and though everyone has tried to figure out ( Friedmann does a good job here )the clusterfuck Brian Burke wrote for known midget Gary Bettman, ( I mean, someone did the math on the radio today, and if Shea Weber plays 13 years and not 14 for the Preds, there is some scenario where they will be penalized 33 MILLION dollars for the cap cheat...seriously. Or he can just go on the LTIR, more likely.) there might be a 2 million a year for 3 year penalty some 7 years in the future. There might be some penalty ( tho, the stories I have read also say that if..say...the Leafs traded for Lui, there is a way they could also end up paying a penalty, so neener neener ya big Irishman ) but that is small potatoes now that you can also trade cap anyhow. A brave new world...one in which the Lawrence Gilmans of the world just became more valuable.

Bottom line is that one of the statistically best goalies in the NHL today is available for a still reasonable rate. So step up with your best deal or possibly made up rumour. Some woman (or man I guess ) today ( and a reason why I love Twitter. It took the machinations of the Smylosphere and the Leafscape to combine and figure out that the "reporter" for the Star was a dodge and her avatar was a stock photo from some corporate site! ) tried today with Frattin, Bozak and a 2nd for Luongo and what they called "Cap Flex". Which was not bad for me. Close too. Give me Cody Franson in that deal instead of Frattin so a local guy can come home and lets get ready to actually enjoy watching the early game on Saturday night!!!

Now NHL. Back to you. Look. I am glad you got a ten year deal ( and seriously you bastards, you better have a good damn reason to opt out after 8 years if you do so... ) and the parts leaked seem to belie a somewhat better way of doing things, but thats it, OK? Well, not quite. There is still re-alignment and I am sure this and that will come up, but 50 / 50 better make you partners now.

Because your market, us, has been far more loyal and rabid than the bullshit you guys have pulled deserve. Yes, part of it is the magnificent spectacle of a sometimes non stop, no out of bounds sport with non stop action, hitting, and absolutely the toughest aerobic team sport I can think of that is hockey. Another sliver is the fact that a great many of us fans ( in this country, and I am sure around the world, but especially in hockey's original home ) have played the game. At one point every damn one of us thought how we could get where you guys have. You are indeed the best of the best, and are the reason why we watch.

Sure. You worked hard. I am not at all begrudging that an NHL level hockey player can and often does retire with more money than he can spend. Thats as much a part of the deal as the owner making millions on your talent as well. But at the very least you guys can freeze your damn ticket prices where they are next year in a place like Canada where very few will desert your sport anyhow. I am sure in the coming days we will here of various "make good with the fans " ideas ( that Centre Ice one for free does sound like a no brainer, and with the owners of the Leafs, to say nothing of the owners of the Flyers owning large cable and broadcast companies. Make it so guys ) that will seek to assuage hurt feelings and bring back those that were rightly hurt my the lockout.

The employees that have their jobs back and the downtown bars and other locales that lost half a season of full houses as fans gather are happy they are working again, but when you look at this deal that they came to, for the life of me I don't see why they could not have got it done before the season. Of course, when teams like the Phoenix Coyotes are already having their best year in that city by NOT PLAYING, the thing is a bit more complicated, I guess.

Nonetheless, for this writer at least, this was the first time ( and this is the 3rd labour stoppage for me ) that someone that has been a fan and an unabashed lover of this sport since I first skated on my ankles, and who first adopted the Canucks over Bobby Orr's Bruins at the age of seven in their first year, had ever considered dumping the sport. I really considered it as what would have happened if you guys had pissed away this season. So, thank you for pulling me back from the self imposed precipice. I suppose its not as stupid as the US Republican Congress doing the same self imposed stupid things to play chicken with the entire global economy, but it had echoes of the same "why are they doing this to themselves" feeling to it.

So, welcome back. You knew you had me at hello anyhow, and that I was secretly praying to my Luongod bobblehead that all would not be lost. But lets try to actually be partners this time, OK? That US market is still willing to buy in. Hell, at least this lockout had far more press when it ended in the United States than the last one! Even Jay Leno and others were making comments about it. Craig Ferguson came out as a fan of the Kings. With a ten year deal and an NBC deal for that long as well, the NHL has a national platform, and a ( ugh ;-) big market team to actually promote the hell out of coming out of this lockout. Its time to show that untapped market what Canadians already know. Hockey is the best team sport in the world.

Now, while we are waiting, let the rosterbation commence. Here's a good one to get you going. If the Oilers want to jump in to get Roberto Luongo, the "rivals surcharge: is Jordan Eberle.