#5 on the list of the top Canucks seasons: 2003-04. This was a season with many negatives for the Canucks, but it was notable enough to land at number five on this list. The season’s highlights included ending the Colorado Avalanche’s dominance of the Northwest Division and Markus Naslund earning yet another First All-Star Team berth, but its low points were Todd Bertuzzi’s attack on the Avalanche’s Steve Moore and subsequent season-long suspension and the team’s first round playoff loss to the Calgary Flames.

Result: Lost in first round to Calgary Flames (4-3)

2003-04 was a season with many negatives for the Canucks, but it was notable enough to land at number five on this list. The season's highlights included ending the Colorado Avalanche's dominance of the Northwest Division and Markus Naslund earning yet another First All-Star Team berth, but its low points were Todd Bertuzzi's attack on the Avalanche's Steve Moore and subsequent season-long suspension and the team's first round playoff loss to the Calgary Flames.

The Colorado Avalanche had dominated the Northwest Division since the grouping was created in 1998, winning the first five division titles - including beating out the Canucks in particularly painful fashion in 2002-03. The Avalanche had also won the Pacific Division in the three years following its move from Quebec. Clearly the Avalanche had had a sustained run of divisional success and were the giants of the Northwest. While the Canucks had been nipping at the heels of the Avalanche, it was not until 2003-04 that they finally bested their divisional foes to capture the division crown by one point and earn a top three playoff seed. Since then the Avalanche have yet to finish first in the division, while the Canucks have become the new dominant team in the Northwest: Vancouver has captured six of the past eight division crowns. 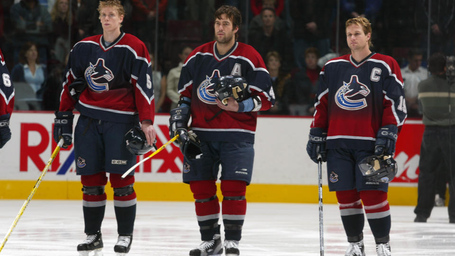 The Avalanche would play a large part in the Canucks season for a very different reason. In a February match, the Avs' Steve Moore concussed Markus Naslund with a questionable hit. Naslund would miss four games. The teams met two weeks later, playing to a 5-5 tie, but when they met again in March things got out of hand. The game was a blowout, with Avalanche eventually winning 9-2. During the third period, Todd Bertuzzi attempted to engage Moore in a fight and then punched and tackled him from behind. Moore fell unconscious to the ice under Bertuzzi and was severely injured. Moore's hockey career was over. Bertuzzi was handed one of the toughest suspensions in NHL history, being banned for the remainder of the regular season and playoffs. He would return to Vancouver for just one more season, the post-lockout 2005-06 campaign, but was never the same player. The incident is one of the darkest and most controversial in Canucks history.

One memorable moment that is worth highlighting occurred when goaltender Chris Levesque entered Canucks lore, despite not paying one second of hockey for the team. Needing an emergency backup goaltender for a December match against the Pittsburgh Penguins, the Canucks contacted the coach of the UBC Thunderbirds who suggested they use the UBC third-stringer. Levesque signed a one day contract with the Canucks, and was on the bench to back up starter Johan Hedberg. Things got dicey when Hedberg appeared to sustain a serious injury, however, the NHLer recovered and spared Levesque the daunting task of stepping between the pipes. Sportsnet cameras, however, caught him nervously chewing gum while trainers examined Hedberg, giving us this memorable image: 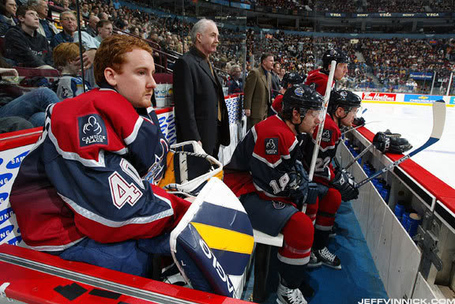 "Oh crap, don't be injured Hedberg!" - Everyone in this picture (via l.yimg.com)

Despite the loss of Bertuzzi, the Canucks entered the playoffs with a solid chance at a deep playoff run. Markus Naslund finished another excellent season, earning his third consecutive First All-Star Team berth. While his 35 goals and 84 points do not look superb, keep in mind that it was an offensively challenged NHL season in which Martin St. Louis won the Art Ross with just 94 points and three players tied for the Rocket Richard Trophy with just 41 goals. Furthermore, Naslund accomplished these stats despite missing four games from his concussion and playing the final 13 games of the season without Bertuzzi on his line.

The Canucks drew division rival the Calgary Flames in the first round. As always when these two teams meet in the playoffs, it was a hotly contested series. After splitting the first two games, the Canucks looked to be in trouble when starting goalie Dan Cloutier was injured in the first period of game three. Johan Hedberg held the fort and earned the win, giving the Canucks a 2-1 series lead, but sending the tandem of Hedberg and Alex Auld up against the Flames' superstar keeper Mikka Kiprusoff did not bode well for the remainder of the series. The situation looked even grimmer when Kiprusoff shut out the Canucks 4-0 in game four.

The Canucks turned to Alex Auld for game five, and he played decently in a 2-1 loss. In game six Vancouver started out well, jumping out to a 4-0 lead, and looked to have regained their division champion form. However, the Flames clawed back to tie the game and send it to overtime. OT proved to be an epic affair, and after 60 minutes of extra time the game remained tied 4-4. Then, early in the fourth overtime, Naslund and Brendan Morrison did some great forechecking deep in the Flames' zone to set up the game-winning goal:

So, just like in 1989 and 1994, the Canucks and Flames headed to a Game 7 to settle their first round playoff series. Two goals from Jarome Iginla had the Canucks trailing 2-1 and on the brink of elimination, before a heroic rush from Markus Naslund led to Matt Cooke tying the game with just six seconds left:

It was the type of moment that, had the Canucks advanced and gone on a deep playoff run, could have gone down in Canucks lore. Alas, it was not to be. Ex-Canuck Martin Gelinas scored less than two minutes into overtime and the Flames won the series in heartbreaking fashion. Calgary would advance all the way to the Stanley Cup Final, where it would suffer its own heartbreak as it fell to the Tampa Bay Lightning in seven games. The Canucks would not get a chance to atone for the disappointing end to the season the following year, as the NHL locked out its players before the start of the 2004-05 season and, ultimately, cancelled the entire season in a staggering and disappointing act of stupidity. When the Canucks core reassembled in 2005-06, it was a shadow of its former self. After missing the playoffs that season, key players such as Bertuzzi and Ed Jovanovski left Vancouver. 2003-04 was the last successful season of the Canucks' West Coast Express era.

2003-04 was a conflicted season for the Canucks, and it is thus perhaps surprising that it appears so high on this list. Nonetheless, it was extremely significant for the fact that the Canucks finally broke the Avalanche's monopoly on the Northwest Division title, that Naslund was awarded his third straight First All-Star Team berth, and that Vancouver played an epic, if disappointing, seven game series against archrival Calgary. As such, it lands at #5 on the list of all-time Canucks seasons.