Canucks Brunch - This Does Not Bode Well

Road trip time, and it may be just what the Canucks need. What better way to take the momentum (yes, there's momentum) from Wednesday's shootout win over the Flames and build on it by getting a chance to pay the Ducks back on their home opener. Sure, the Ducks have played well so far, but an improving Canucks squad looking for revenge should turn the tables on them tonight, as sure as Bruce Boudreau has a reservation at Red Lobster after the morning skate...

Share All sharing options for: Canucks Brunch - This Does Not Bode Well 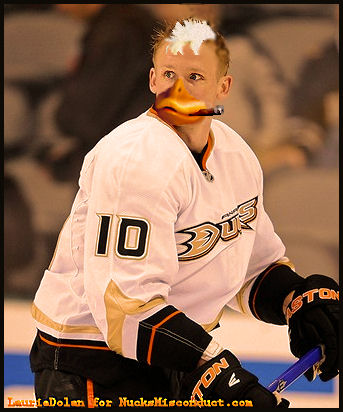 Thanks to Laurie aka MrsWaachcast as always for the photochop awesomeness

Yea, though there is much hand-wringing in the land of Johnny Canuck, all is not lost. For a Kassian will guide them. Ehh, maybe it's a bit early, but the strong start from Zack Kassian on the 1st line with the Sedins may be just the thing that gets the others going, too. There's been a lot of shuffling and adjusting going on thanks to the injuries to Ryan Kesler and David Booth, but if they can settle into a nice groove here on this road trip, they may be able to weather the storm until the Keslordian One returns. One thing that will need to happen is for Alexandre Burrows to mesh with whoever he's playing with, because he seems really out of sync right now, and with Maxim Lapierre a game-time decision with a groin tweak, that's going to really put some pressure on Burr to step up during the inevitable 5-7 penalty kills that will come tonight. If Lappy can't go, that will see Andrew Ebbett draw back in, and hopefully that's enough motivation for him to give Mike Gillis a reason not to ship him back to Chicago just yet.

Cory Schneider gets the nod tonight in goal as he looks to show that he was just having an off-night back on Saturday when the Ducks got 5 on him before chasing him in favour of Roberto Luongo. That means we'll see Luongo either in San Jose Sunday or Los Angeles Monday night. Either way, even if Schneider has a good game, I expect this one to be a tad on the wild side, as the games between these two always are.

The Ducks are looking to win three in a row to start the season for the just the 2nd time in franchise history. The last time they did that? 2006-07. Their Cup year. And while the Ducks have looked good in their first two outings, Teemu Selanne isn't gonna have 4 point nights every time, and you're certainly not going to see Daniel Winnik's name on the scoresheet too many more times this year. The Canucks D will need to be better against a team that does bring a balanced attack, and will also need to make sure to take advantage of the numerous power plays that will be rewarded when the Ducks play like the dirty bastards that they are. The PK will definitely have to be better, because the Ducks going (checks the game stats) 100% on the PP last time?!?! Are you kidding me?!?! Ahem. The PK will need to better.

Sports has it's way of imitating real life, and much like the current landscape of American politics, where conservatives will have you believe that Beyonce lip-syncing at Obama's inauguration and 4 US soldiers dying in Benghazi are the worst things to happen to the US since 9/11, the hockey world is up in arms over Nail Yakupov's goal celebration last night. Yakupov potted the tying goal with just 4 seconds left, and was, shall we say just a tad excited?

First, lay off the kid. Hockey just got back, and already you're harumpfing like Statler and Waldorf over something that is going to get attention across the sporting world? Get real. Let him and the Oilers have this moment. It was great to see, and let's be honest: this may be as good as it gets for the kids in Edmonton again this year. Yeah, sorry but I don't think you should read anything into them having a winning record so far, when they've yet to hold a lead. On the bright side, maybe if they OT and shootout their way into a playoff spot, it will make Gary Bettman see just how stupid the shootouts really are. Yeah, I know he won't. Oh, and can we stop using the word 'celly' please? It's 'nails on a chalkboard' irritating... In other exciting news, John Tortorella is back and as ornery as ever!!! Awesome... Mike Knuble is once again back with the Flyers, in a move that obviously addresses their most glaring need, right? Oi... My new favorite thing on Twitter? Enjoying the shades of bitter LA Kings tweeters are getting with each loss... So, how about those goaltenders in Toronto? If last night wasn't a textbook example of why they should have already made the deal for Luongo, I don't know what is... Washington really seems to be struggling out of the gate, dead last in the East, the only team yet to get even a single point, and a goal differential of -8. That's even worse than the last place LA Kings (yes, I love saying that). You know who else is in trouble early on? The Phoenix Coyotes. They've already given up 16 goals in just 3 games. Sure they've scored 15, but with G Mike Smith out of action for the time being, they'll turn to former Canuck Jason LaBarbera against the Kings tonight. No word on how long Smith will be out of action...

While bands like Death and Cannibal Corpse receive the bulk of the credit for the creation of the death metal genre, one cannot overlook the influence that Suffocation have had on the US death metal scene. They've got a new album 'Pinnacle Of Bedlam' out February 15th on Nuclear Blast Records, and if you like it bone-crushingly heavy, you will want to pick this up. Saw them in Victoria a few years ago, and they were amazing.