Canucks Brunch: Don't Get Yer Britches In A Knot!

Far from an optimal start, you say? No kidding. And while the Canucks aren't alone on a list of upper echelon teams that have stumbled out of the gate, the Chicken Little-ish hysteria is far from a shock. A team with a fan base that bitches and moans when things are going well is hitting warp speed just 2 games in. Things could be a lot worse, ladies and gents. And tonight might be the start of a turn-around as they take on a team whose wheels fell off the chuckwagon even before the season began, The Calgary Flames.

Share All sharing options for: Canucks Brunch: Don't Get Yer Britches In A Knot! 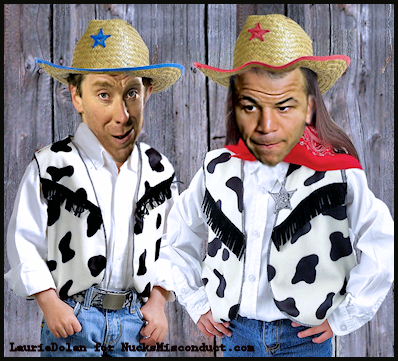 The season opener was an unmitigated disaster. The follow up showed signs of improvement, but still nowhere good enough. Oddly enough had the Canucks won against the Ducks, we'd probably not see fans in the state of rage they are right now, right? Yeah, I know. Of course we would. Not much to do but let them clutter facebook, twitter and the Team 1040 airwaves with their 'wisdom' and tune it out as best as possible. So why not a game against a team that seems to have spent the last few years spinning it's wheels, doing little to nothing as far as improving itself, repeatedly telling it's fans there's no need for a rebuild. And the two cowpokes pictured above have to wonder if should this be another sub-par season for the Flames, if one or both of them will be gone before the end of it.

The thought of Miikka Kiprusoff being shipped out of Calgary seems a little crazy now that the Flames tossed Henrik Karlsson to the Blackhawks for a 7th round draft pick. And while the Flames still have faith in the abilities of Leland Irving, I find it hard to believe they'd have plans in the near future of having him be their #1. So it seems like another season of Kiprusoff handling the bulk of the workload. Not the biggest concern because of the shortened season, but still without much rest, Kipper may once again falter down the stretch as the defensively deficient Flames leave him hung out to dry. You have to wonder whether they should have just bit the bullet and bought out Jay Bouwmeester and his albatross of a contract. I am sure some Flames fans will immediately try and deflect by pointing at Luongo's contract, to which I say please come back with that comparison when Bouwmeester leads the Flames to the Stanley Cup Finals.

The Flames did make some changes up front this year, with the additions of Jiri Hudler (who won't return to their lineup til Saturday following the passing of his father), Roman Cervenka who is still out with a blood clot. Anton Babchuk will be out of the Flames D rotation until next month with a shoulder injury. So both teams are pretty much on level ground as far as injuries go, one could say. The most noticeable difference for the Flames will be behind the bench as Bob Hartley, long time Colorado Avalanche coach makes his return to the league as the Flames bench boss.

A lot of line shuffling for the Canucks tonight as they try and get some type of combination together that will work. The top line Daniel Sedin, Henrik Sedin and He-Who-Laid-The-Beating-On-Eager himself, Zack Kassian will remain the same. Alexandre Burrows will center Jannik Hansen and Chris Higgins on the 2nd line, while Dale Weise and Bambi Mason Raymond will flank Jordan Schroeder in his NHL debut. The 4th line of Maxim Lapierre, Manny Malhotra and Aaron Volpatti will stay the same. No changes on D tonight (hmm... okay) and as mentioned umpteen billion times in a way that makes it sound controversial, Cory Schneider gets his scheduled start.

The keys to winning this game tonight are simple: 60 minute effort, simplify things, and stay out of the box. The power play hasn't been terrible early in the season so far, so using their speed to draw penalties to get some PP opportunities will be key. And they are going to need to generate more shots than we saw them muster in the first couple games. Obviously a loss wouldn't be a good thing, but I do believe they're gonna turn things around tonight.

The Shanahammer is back, doling out his first punishment of the season, a 1 game suspension to the Flyers' Brayden Schenn for leaving his feet to deliver a headshot on Anton Volchenkov of the New Jersey Devils. Flyers fans are reacting rationally, as usual... Bad news for the Avalanche as they are going to lose Steve Downey for the season after suffering a torn ACL that will require surgery... The Detroit Red Wings will be without Ian White for 2-3 weeks after leg surgery... Scott Gomez signed a $700,000/year contract with the San Jose Sharks. Yeah, I got nothing for that one... and the Edmonton City Council and owners of the Oilers the Katz Group have announced a deal that will see taxpayers shell out ridiculous amounts of money to build a rink for a billionaire. I don't even want to post a link, because it's just as sad and shameful as their record over the last few seasons. So remember Edmontonians, when paying through the nose on your municipal taxes and other things, you could have just let him move to Seattle. Victory?

They're coming to Vancouver soon along with Exodus and Municipal Waste, and will be releasing an EP of cover tunes (and let's face it, they're one of the better metal acts over the years when it comes to cover tunes). Here's the first of those, a really faithful and heartfelt rendition of RUSH's 'Anthem'.