Not gonna lie, I did some checking this morning to make sure this wasn't all some elaborate hoax. Hockey is back my friends, and we are thrilled to see so many of you coming home for this. Some names we haven't seen in quite a while. Today really is about the fans, so get your beverage of choice, some heavily salted snacks, get the pizza place on speed dial and get ready to cheer on our boys in blue & green!

Share All sharing options for: Canucks Brunch: RELEASE THE ZACKEN! 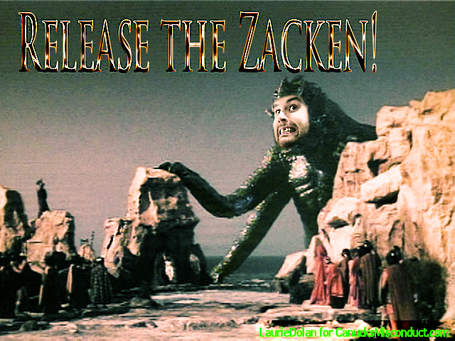 I could sit here and get all soapbox-y right now, about the lockout and how much it hurt the game and we, the fans. Not going to however. All I wanted was the game back, and now we have that. While we're not exactly strangers to some sort of giant controversy swirling around the team as the season begins, I think it's a good thing that the pressure that comes with being considered a favorite to win the Cup is a good thing. Let that burden rest on the shoulder of others for a change. That's not to say the Canucks don't have a shot, not at all. This is still a very good hockey club, albeit a banged-up one, with (for the moment) 2 damn good goaltenders.

Obviously there will be some sort of a move from GM Mike Gillis to deal with the issues at center to replace Ryan Kesler doesn't make his way back into the lineup soon. That's a metric tonne of pressure on Andrew Ebbett to fill those big shoes. Add in 2 guys who are also expected to perform better than last season in Mason Raymond and Zack Kassian, and the 2nd line is going to be a major focus for the Canucks in this crazy, every game matters season.

Defensively the Canucks look set as Hamhuis and Bieksa, Alexander Edler and off-season signing Jason Garrison on the 2nd pairing, and Keith Ballard with Chris Tanev as the 3rd pair. Those last 2 gentlemen will be under the microscope with Andrew Alberts, Cam Barker and Jim Vandermeer all waiting in the press box, eager to draw in. Barker, by all accounts performed well in camp, and bad games from either Ballard or Tanev will likely see him get a shot at some game action.

Tonight is also one of the last chances we will get to see Teemu Selanne play in Vancouver. The Finnish Flash still looks like he could play forever, but there's a good chance this will be his NHL swansong. Even though this Ducks team are for the most part a collection of some of the more loathsome scum the league has to offer, Selanne is and has always been one of those players that reminds you of why we love this game so much. Sure he may frustrate you because you don't seem to stop him from scoring, just delay him. It has been a true pleasure to watch this hockey magician perform, though. Let's hope he has an off-night, and the rest of the Ducks can get bent ...

Are those ribs ready yet? Damn I'm hungry!!!

The Detroit Red Wings announced this morning that Todd Bertuzzi has been diagnosed with mono, and is expected to miss 'several weeks'. One hopes Big Bert hasn't infected his teammates, because seeing the Red Wings get sick and lose a bunch of games would be just turrible... And it's looking like the winner of the Scott Gomez sweepstakes is going to be... the San Jose Sharks?

OK, Scott Gomez is in San Jose going through the physicals & to see if this is going to work for both parties. #NHL

We'll see how that pans out... The Islanders' Rick DiPietro can't seem to catch a break that doesn't involve a cast and time on the IR, apparently... The Kings will raise their banner today and then take on the Blackhawks. That is truly one of those games where one hopes the two teams beat the hell out of each other. In a bad way. Because they're jerks. Sigh...

Puck Daddy released their Stanley Cup Predictions, and like many pundits, they're either calling Rangers or Kings, with the obligatory Pittsburgh Penguins pick by a guy who didn't see just how bloody awful Marc-Andre Fleury was last post-season... Speaking of pressure, the Rick Nash era begins in NYC today as the Rangers take on the Bruins. Anyone checked on Tea Bag Timmy lately? The newspapers are starting to pile up outside his bunker... You know what will be weird tonight? Not having those obligatory Burkie reactions in the GM's box when the Leafs give up a brutal goal against the Habs. Maybe Nonis has been working on his 'WTF?!?!' face this week... The Oilers and Flames are not playing in opening day, because they're from Alberta and thus, not true Canadians. We'll see the team that's going to win all the trophies til the end of time tomorrow as the Oilers open against our boys... Winnipeg and Ottawa are kicking off CBC's triple header coverage today at noon our time, so feel free to use this as an open thread. Enjoy the game, and welcome back!

Vancouver's own 3 Inches Of Blood with 'Leave It On The Ice'. How fitting...