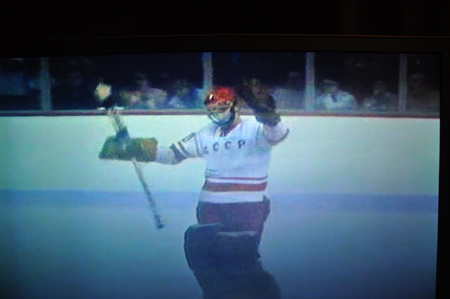 I am writing these posts as I watch the games on DVD.

Game 1 at the Forum in Montreal. 18,818 in attendance. The series would move west as it went along. Prime Minister Pierre Trudeau dropped the puck for the ceremonial faceoff. The players exchanged gifts as is customary for international play. Foster Hewitt, the infamous play by play announcer for Hockey Night In Canada said the tension in the air was more than he had ever felt.

NOTE: The great Bobby Orr did not play in the series. He had a leg injury. Bobby Hull, a super sniper did not play in this series either. Why? Because he defected to the WHA (World Hockey Association), a rival league to the NHL. Imagine if those two guys were on the roster. Two massive game breakers.

Just to increase Canada's cockiness, Phil Esposito bangs a puck out of the air (after Frank Mahovlich swiped it towards Vladislav Tretiak) and the pucks goes in to make it 1-0 Canada, 30 seconds in. Oh, we're gonna kill them aren't we? Paul Henderson takes

a tripping penalty soon after, and that really seemed to allow the Russians to settle down. They were attacking the zone repeatedly on that power play, but the Canadians were blocking the shots like mad, and Red Berenson kept clearing it out. The Russians kept attacking to no avail.

Suddenly, at the 6:13 mark, Bobby Clarke wins a draw cleanly in the Soviet zone. The puck gets tipped by Dan Ellis to the stick of Paul Henderson who rips a wrister from just inside the blue line that surprises Tretiak. 2-0 Canada! We're gonna kick their butts 8 straight!

The Russians don't buckle though. They keep charging in, but the pace is fairly even. At 11:40 Alexander Yakushev puts the puck across Ken Dryden's crease and Yevgeny (Evgeni, same thing) Zimin one-times it into the net. 2-1 Canada.

The Russians take a tripping penalty. They kill it off. They take another tripping penalty minutes later and immediately charge up the ice 2 on 1. Boris Mikhailov elects to shoot and Dryden makes the save but the rebound goes to Vladimir Petrov who buries it. 2-2. The Montreal crowd falls silent.

One thing I did not know until now: Vladislav Tretiak was only 20 years old at the time of this series. Damn, the kid looks composed!

The action is somewhat reserved until the 2:40 mark, when Valery Kharlamov starts from his own end and gathers speed up the ice. He bolts over the Canadian blueline and makes Don Awrey look like a pylon. He breaks in on Dryden and makes no mistake with a shot along the ice before Awrey can swipe the puck away. 3-2 Russia. Check it out:

The Russians are fast, and the Canadians are looking....stunned perhaps. The Soviets are skating hard, at all times, in both zones. Their defence is impressive.

Bobby Clarke takes a slashing penalty and the Russians can't hit the net. Canada holds them at bay. Tretiak foils a 2 on 1 after Clarke's penalty expires.

Moments later, Kharlamov breaks in on the left side and blows a slap shot past an unsuspecting Dryden. 4-2 Russia. For the second straight time, Alexander Maltsev gets the only assist on Kharlamov's goal.

Canada seems to get another wind later in the period but generate almost nothing past the Soviet D. They look gassed. The Russians don't.

Note: Several Canadian players have said that the Soviet team's conditioning was superb. The Russians had been training months for this. The Canadians for only a couple weeks after a laid-back summer.

Tretiak robs Esposito with a pad save in the first minute. A point blank chance thwarted. Another big save by Tretiak moments later. Then the Russians start attacking again, led by the superb Kharlamov. He reminds me of Evgeny Malkin the way he is hard to knock off the puck and controls the play. And he was just stopped by Dryden after an amazing one-man effort.

Fog starting to come off the ice at the Forum. It's getting worse and worse.

Another stop by Dryden as the Soviets show no mercy. Canada just can't get on the attack consistently anymore because the Soviets are out hustling them at every turn.

Out of the blue, at the 8:22 mark, a faceoff in the Soviet zone which Canada wins and they maintain control. A 3-way passing play between Henderson, Ron Ellis and Bobby Clarke results in a Clarke tap-in to make it 4-3 Russia. This energizes the Canadians as they finally attack with some consistency. Canada is smelling blood right now as the Soviets are on their heels. Woa! Big glove save by Tretiak on Mahovlich! The Russian goalie actually makes the vast majority of his saves look easy. He is very good at cutting off angles, and staying on his feet for that matter. Right after that (13:32 mark), the Soviets charge up the ice and Mikhailov skates over the Canadian blueline and the D backs up too much. Nobody takes him. He changes to his backhand and buries it. 5-3 Russia.

The Canadians are deflated. Moments later, Yevgeny Zimin skates in, no D takes him, at least, not very effectively, and he can fake out Dryden to score a sneaky cool one. 6-3 Russia. Canada thinks they scored moments later but it was a huge stop by Tretiak. The Soviets go into a defensive shell at this point until there is about 2:00 left. Then Vladimir Shardrin makes a pass to Boris Mikhailov who cuts in front of Dryden, waits, waits, waits and then roofs it over the fallen goaltender. What a patient beauty that was! 7-3 Russia.

The Russians make a statement by continuing their attack with the game out of hand. After a whistle with 20 seconds left, the Canadians show their frustration as Guy Lapointe cross checks a guy and Esposito throws a bit of an elbow at another player.

Game over. The composed Soviets look happy. The Canadians are embarrassed. Their pride and cockiness takes a huge jolt.

Notes: As I said earlier, the Canadians were not in game shape yet and it showed. They got owned by the Russians, who were allowed to play their style the majority of the game. One thing that was surprisingly lacking, was Canada's physical play. Hell, these guys were brutes when they played in NHL games and it looked as though they let the Russians off the hook for the first game. Being gassed didn't help. It felt like the Soviets lured them into their skill game as well. It was the Russians who out-muscled the Canadians. There were no bone-crushing checks. They just muscled the Canadians off the puck relentlessly. Maybe it was just the new team they were playing from another country, I don't know. But the Canadian physicality and mentality was going to make an appearance in this series soon enough.

Paul Henderson states in his book "Shooting For Glory" that the scouting report on Vladislav Tretiak was that he was weak with the glove. That Canada was thinking that even losing 1 game to the Russians would be an embarrassment. They wanted to blow the Commies out of the water and couldn't wait to do it.

So much for that notion.

Game 1 recap by Joe Pelletier, including rosters at 1972SummitSeries.com.

How awesome was the voice of Foster Hewitt?