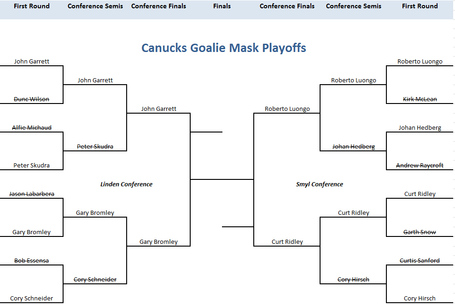 After eight weeks of voting and several debates (we're all art critics!) we're left with four Vancouver Canuck netminders who will battle it out for best mask in franchise history.

This week is the battle for the Linden conference between the two heavyweights: John Garrett (who squashed Dunc Wilson and Peter Skudra to make the final four) and Gary Bromley (who ran roughshod over Jason Labarbera before edging out Cory Schneider).

Only one vintage flying V can punch through and fight for the crown. Vote your conscience away below.

Bromley Mask Gallery: Bromley was 5'10'' and weighed between 140-160 lbs. In short, he was "skin and bones." Hence the bones nickname and his mask design which speaks for itself and stands out, according to a goalie mask book by The Hockey News, as one of the greatest masks of all time. [1] [2] [3]