Share All sharing options for: How To Earn A Raise: Burrows Re-Ups for 4 Yrs, $18 Million 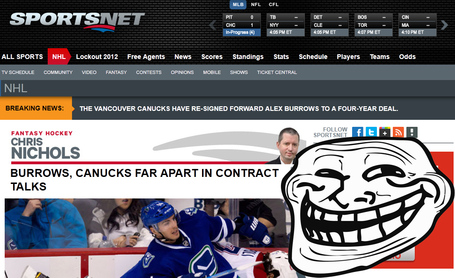 Today is a good day. Mr. Everything - aka the dragon-slayer - is sticking around. Via the mothership:

Burrows, 31, collected 52 points (28-24-52) and 90 penalty minutes in 80 games played in 2011.12. He also set a career high for most game-winning goals in a season with seven, ranking 11th in the League in this category. Following the conclusion of the season, Burrows represented Team Canada at the World Championships.

Here he is signing the deal. With the KesLORD looming over his shoulder as per usual. UPDATE: Canucks.com has a piece up on the re-signing now. Choice quote: "Me and my family really like it here in Vancouver, we like the organization, it’s a team that wants to win and wants to win the Stanley Cup and that’s exactly what I want to do. It makes sense for me to get a deal done and be here for another five years will be a lot of fun.”

There was some banter this morning that Burrows could be on his way out the door if he wasn't re-upped before the CBA expiration. As we've said in the comments, there's several ways to skin a cat and the Canucks have the cash to retain their talent. Done and done. With all the chatter about Patrick Sharp prices, praise be to Gilman, Bowness and Gillis who keep finding ways to retain players at decent cap hits.

If ever there was a player in the past few seasons who earned himself a raise, it's Burrows. Let the haters hate, the undrafted ECHLer pretty much kicked off the hometown discount trend in Vancouver in 2009 when he signed a four-year, $8 million deal and since then - greatly aided by being the third Sedin blessed with astronomically high offensive zone starts - he's held up his end of the bargain: 117 goals (17 game winners) and 218 points.

How much longer the Sedins and Burrows can continue to perform at their current level remains to be seen, but for now the first line is intact for the next two seasons. Burrows' new deal keeps him in Vancouver through 2017-18, one year longer than Kesler's current deal and two year's long than the Sedins. The deal, according to Murph, includes a NTC. Burrows will be 34 when the current deal expires.

Don't go anywhere. With the possibility that Edler is next on the horizon before CBA hell and the Doan decision pending in one hour, this day ain't over.