Best Canucks Masks, Round I: John Garrett vs. Dunc Wilson

Share All sharing options for: Best Canucks Masks, Round I: John Garrett vs. Dunc Wilson 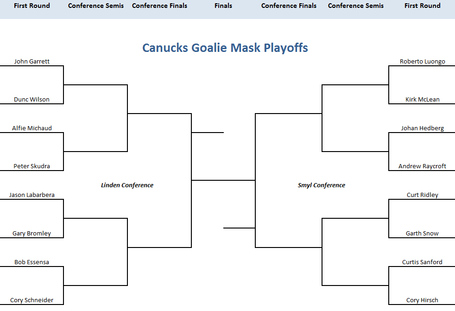 ...and we're off! The updated bracket with the final contestants is above. Click the image (or right here) for the bigger view.

The rules are simple: ignoring cages, which goalie has had the best mask design in franchise history? We've narrowed the list down to the top 16 and your votes will determine the winner. Right out of the gate battling for the Linden Conference chalice are old timers John Garrett and Dunc Wilson.

Some background on each netminder along with image links after the jump.

The 38th pick by the St. Louis Blues in the 1971 Entry Draft, Garrett actually played more in the WHA than NHL. He holds the most wins for any WHA goalie before the league went belly up in 1979. Afterwards Garrett transitioned to the NHL where he'd play 207 games for Hartford, Quebec and Vancouver, stringing together a 68-91-37 record with a .843 SV% and 4.27 GAA. His time in Vancouver was largely forgettable as he backed up Richard Brodeur and only appeared in 50 games over two years before retiring in 1986. His only career shutout was for the Canucks. You're more likely to hear Cheech these days in color commentary mode for Sportsnet, frequently discussing food. Yes...food.

Wilson played from 1968-1979, appearing in 287 games for the Canucks, Flyers, Leafs, Rangers and Penguins. Wilson was one of the original three goalies the Canucks employed during their inaugural 1970-71 season, but since the team was horrific, Wilson suffered a 3-25-2 record his first season. Undeterred the Canucks made him their starter for the next two years and Wilson posted better results (16 wins in 1971-72, 13 in 72-73) but again paid the price statistically for backstopping an expansion squad. He also had a cute squabble with then coach Hal Laycoe:

But Dunc could not find a good barber in Vancouver. He had shoulder length hair, which didn't suit Canucks coach Hal Laycoe at all. Dunc later said that the coach didn't rate him by his ability to stop pucks but judged him on the hair and what he was doing off the ice. Several teammates agreed with Dunc.

Wilson was traded to the Leafs in 1973 (where he backed up Doug Favell) and then later to the Rangers (where he backed up good ol' John Davidson). He regained his footing by 1976 when he started for the Penguins but lost the starting gig a year later to Denis Herron. Wilson returned to the Canucks in 1978 behind Glen Hanlon and Gary Bromley and retired at the end of the season.

Wilson Trivia: Wilson was the second player to sue the Canucks for medical negligence for diagnosing and treating an injury (a mole that went untreated and turned out to be skin cancer which shortened his career). Mike Robitaille was the first.