Get Your Vote On: Ranking The Best Canucks Goalie Masks Of All Time

Share All sharing options for: Get Your Vote On: Ranking The Best Canucks Goalie Masks Of All Time 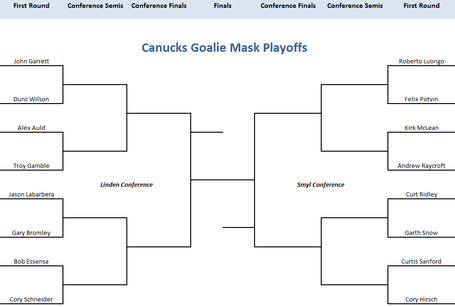 Prompted by the news of Cory Schneider's new lid and the discussion we had in the thread and again on Twitter, it felt natural to try and rank the best Vancouver goalie masks of all time.

Of course "of all time" isn't truly fair because a number of netminders are automatically nixed because they used the basic cage or shield of their era, which includes Richard Brodeur and Glen Hanlon to Dan Cloutier and Arturs Irbe. Our apologies to these fine gentleman, but we're focusing on those who took more of a stylistic liberty with their facial protection.

Click the above chart for the tentative bracket. We'll roll each match-up out in a separate post and allow you to vote on your favorite. In the end the Linden and Smyl conference champs (...awesome...) will battle it out for the best mask of all time.

If you feel strongly we left out an option, drop it in the comments. Also let us know if you prefer we focus on a specific mask for those guys (like Luongo) who have had several over the years. We'll narrow it down to the top option to make the voting more fair.

Update - Zandberg has stepped to the plate and nominated Hedberg and Michaud replace Auld and McLean. Thoughts?

Update #2 - Skruda has been requested. Any preference on Skudra being added before Hedberg or Michaud?