As The Clock Ticks, Let's Throw Some More Love At Cory Schneider

Share All sharing options for: As The Clock Ticks, Let's Throw Some More Love At Cory Schneider

As we wait with baited breath for July 1st and the inevitable first blink by either Mike Gillis/Brian Burke/Dale Tallon/Scott Howson (ok, just kidding on that last one) as to where Roberto Luongo may end up, let's focus on the reason Vancouver has a goaltending problem to begin with: your favorite daywalker Cory Schneider.

If you're familiar with Hockey Prospectus then you've seen the concept of "quality starts" (QS) which is their way of quantifying a good goalie: wins are pushed aside in favor of evaluating shot blocking percentages/averages across the league. By doing so it helps highlight which goalie consistently give their team the best chance of winning; if a goalie meets their criteria, they're 75% likely to win their games

I know some hate this sort of analysis, so I'll give you the spoiler alert now: the Ginger Jesus is freaky good. For those who like numbers, hit the jump.

The only caveat when reviewing Schneider is his the small sample size: being the back-up means he's only played an average of 29 games the past two seasons which includes games he spelled Luongo. Nevertheless at least 20 starts a season is the typical cut off in the examinations below.

Hockey Prospectus recently ran the numbers for QS last year which is defined as:

I'll toss out the bottom half and just focus on the top five goaltenders in 2011-12 with the highest QS%:

Talk about rare company: Schneider is sandwiched between the two goalies who brought home the Jennings award (which Schneider and Luongo won in 2011) and finished ahead of the reigning Conn Smythe and Vezina winners.

Hockey Prospectus was kind enough to release all kinds of QS data going back to 2007. By doing we can expand the view and see some annual trends, beginning with where Schneider's QS ranks against the top 10 GAA leaders from the past two seasons: 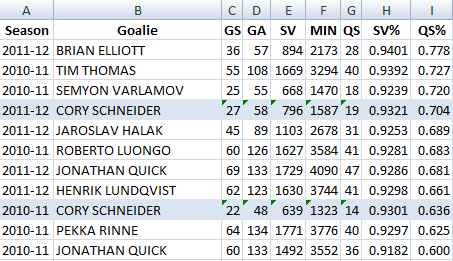 Schneider holds his own again, be it against Thomas last season or Quick this season. For that matter so did Luongo last year. That ultimately begs the question Mike Gillis and crew (money and hurt feelings aside) must have asked themselves already: if you're going to break up the tandem what goalie is going to consistently give the Canucks the best chance of winning?

In 2010-11 the Canucks planned to use Schneider more strategically, giving Luongo a chance to rest and it worked: their QS of 68% and 63% respectively were enough to put both players in the top ten QS% in the league (not to mention that whole Presidents' Cup and Jennings award stuff). But this season the contrast was more stark: Schneider took the step forward by providing clearly better quality starts - the only goalie to make the top ten list in the past two seasons - while Luongo plummeted from 2nd best to 17th this season (sandwiched between Varlamov and Josh Harding).

The moral here is if you believe the QS metric when evaluating goalies then Schneider isn't just one of the league's most consistent goalies the past two seasons, but last season he quietly became the better option for Vancouver. However Luongo has shouldered the load each of his six seasons in Vancouver, so we have no idea what these numbers look like once Schneider becomes a starter and is tested over 50+ games. He may stay just as consistent he could devolve into last season's Varlamov (which will be greatly enhanced if he's moved to a rebuilding team).

Another idea is neither goalie is moved and Vancouver ends up deploying both again, in which case the trends suggest Schneider eats more games as the starter (a la their 2010-2011 gameplan with Luongo as the starter) and the duo continues to provide a strong combined QS%.

But, of course, starting the 2012-13 season with both guys is just silly. And silly never works in the NHL. Right?