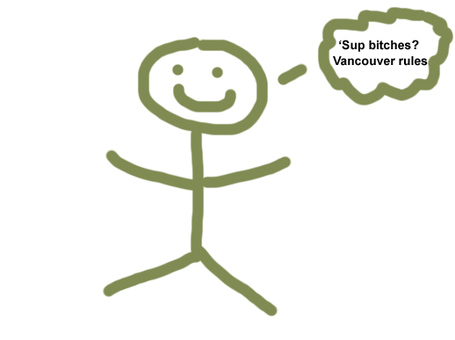 SBN is cracking down on unattributed photos, but I have it on good authority this is what Colton Sissons looks like

As we have in previous years before the draft, the SBN hockey group has been having a mock draft to see who will land where. Last year we picked Joe Morrow but Pittsburgh jumped on the blueliner five spots before Vancouver took Nicklas Jensen. 2010 we picked...ah, who cares we traded it for Ballard. In 2009 we eyed John Moore but Columbus took him one spot before Vancouver who used their 22nd pick to take Jordan Schroeder.
Thus, in full disclosure: we're pretty bad at this. Nevertheless, like any good gambler, we don't know when to quit. Hence which youngster best helps Vancouver this year?
What if I said he is maybe one of the best two-way players in the draft and possibly the best defensive forward in the top 30? What if I said he's one of the best top ten options heading out of the WHL? What if I said he models himself after Ryan Kesler and Mike Richards? What if I said his solid work ethic has already made him a team captain, thereby meeting MG's repeated claim of stressing character was well as skill? What if the chances are good he'll actually be available by the time Vancouver picks at 26th? What if I said he's on the Twitter? Hell, what if i I said he's a Vancouver native who's favorite team just so happens to be your favorite team?
Great, I have your attention. Now meet Colton Sissons, the latest fake Vancouver Canuck. Enjoy fantasy land after the jump.

Via The Scouting Report in January

With good size and a lethal shot, Sissons undoubtedly projects on the high end as a top-6 winger in the NHL. His game is not without question marks, though – as he currently has a team-worst -15 rating. Sissons could also benefit from using his teammates better as evidenced by his low assist totals, however has certainly shown a knack for being a hard worker on the ice. Sissons was recently named captain of his team for the upcoming CHL top prospects game, which proves his ability to lead by example on the ice. Look for Sissons to continue to put up impressive goal scoring numbers, while also continuing to improve his all-around game leading up to the draft.

Via the Scouting Report in June

Big bodied winger Colton Sissons may not have improved on his overall point total from his rookie season, however he did step up and score 9 more goals, finishing with 26 on the season. Sissons uses his large frame to battle for pucks in the hard areas, and has quick hands around the net. While only 18-years-old, Sissons was thrust into a larger role with a younger Kelowna team this season, and though he didn’t produce huge numbers, his all-around game continued to improve. Sissons will have to work on his foot speed and will also have to show that he can score on a more consistent basis, but certainly has the tools to be a good two-way winger at the next level.

A responsible two-way forward with a high level of compete, Sissons makes an impact at both ends of the rink for the Rockets. The 6’1", 189-lb center, who also plays right wing, has good skating ability and mobility, and plays a very strong defensive game. With good size and strength, Sissons excels at winning those grinding battles on the boards and in the corners, and can protect the puck well.

Yet, Sissons’ game isn’t all about defense. With a heavy and accurate shot, and solid hockey sense and vision, Sissons has the ability to create offense and put the puck in the net. As captain of the Rockets, he’s also considered a tremendous leader on his team, always setting a good example with his tireless work ethic and compete level.

There's no shortage of holes when looking at Vancouver's prospects. To that end HF has Vancouver pegged at 29th with only San Jose having a shorter supply of young talent in the pipeline. Consider in net no one after Eddie Lack feels like an NHL candidate. At right wing Anton Rodin and Jensen are there in addition to Zach Kassian, but nothing to get excited behind them. Don't even bother with the left wing unless FOTB Bill Sweatt can punch a ticket into the line-up. Defense is where Vancouver is strongest with Tanev, Connauton and Sauve along with interesting projects in Polasek, Corrado and McNally.

It wouldn't be shocking to see Vancouver go back to the well with another defensive selection, but since I'm in charge of this fairy tale I'm taking a center. They badly need another option down the middle, especially if Schroeder doesn't show at camp ready to step in for Kesler. I hesitate to bring the name Hodgson up, but trading him left the cupboard bare, too bare for my liking. So no matter what Gillis does I hope he finds a way to get some quality prospects at the center spot.

Sissons has all the markings of a game changer as either a second or third line center. The fact he's the Rocket's captain already rings more like a Hodgson blue chipper which is exactly what this team needs. His development suggests he can compete at any level and his glowing projections indicate he shouldn't tail off into Nathan Smith land. Unlike Hodgson he'd come with a high pedigree of defensive soundness and a willingness to crash and bang if he has to. If Vancouver can't have him, pray to your deity of preference he doesn't end up in Boston, Chicago and now LA.