Luongo To Columbus For Nash?

Share All sharing options for: Luongo To Columbus For Nash? 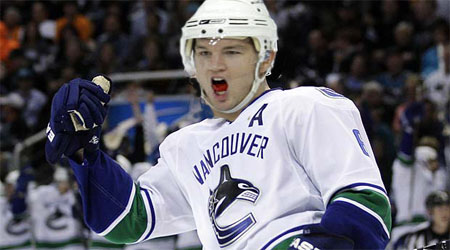 It was thought Nash didn’t want to go to a West Coast team, but it’s possible he may have broadened his list since February to facilitate a trade. I’ve heard talk of the Canucks offering up Luongo if he were willing to go to Columbus, where his former goalie coach now works with the Blue Jackets. It would certainly be a blockbuster move if that were to be done, but one wonders just how keen Luongo would be to go to a perpetually rebuilding team like the Jackets.

In the off-season and around the trade deadline I always tune it to Spector's Hockey, which is run by a very wise man named Lyle Richardson. The Blue Jackets are asking a lot for Rick Nash. The Rangers still seem to be in the mix, or in the forefront. But hey, let's rosterbate some more. Let's pretend we are Mike Gillis and Roberto Luongo and Nash are willing to go to the respective teams. Make the deal. How would you do it? Hey, feel free to turn down Nash altogether as well. Just encouraging discussion.