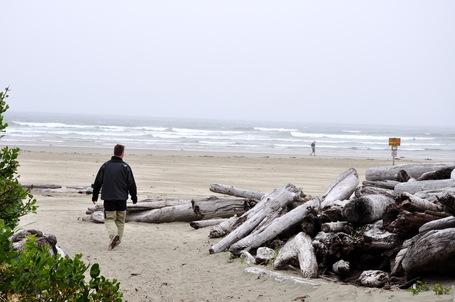 While all you bums toil away at your jobs I have just arrived in kickass Tofino BC to learn the surfing technique! I've been on holidays (Okanagan and Abbotsford) for the past week already and have managed to stay offline for the huge majority of it. It's good to do that once in a while.

Vancouver Island...how I long for this to be my home.

Got some great pics of a black bear cub just outside of the park here. I met Shane O'Brien's uncle in a Nanoose Bay liquor store. He was wearing a Leafs hat so I started talking to him about bad luck. He then introduced himself as the uncle of SOB and

I could tell right away because of the resemblance. He was open about SOB's problems in Van, and said the the Canucks sure could have used him and Willie Mitchell on the back end this year (after I had said we lacked physical intimidation.) He then said that the Sedins used to pay off O'Brien's fines because they liked how he stood up for them. Not sure if that's true or not, but hey! Hell of a story!

Word on the street here in Tofino is that Willie Mitchell is building a huge place on the water just down from the cabin I am staying at. I was also told that he might be bringing the Cup here for part of his festivities. Mitchell and his good buddy Brendan Morrison have fishing derbies on the Island during the summer.

Why does any of this matter? It doesn't! It's an Open Thread for the weekend! Hope all of you are well!