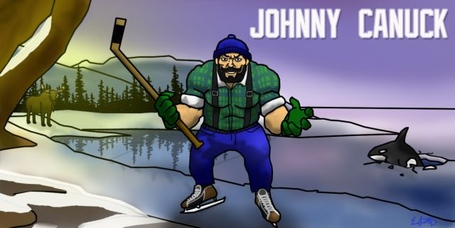 Late last night the Province caught word that Alexandre Grenier signed a one-year deal to play for the Red Bull Salzburg in the Austrian Hockey League. Grenier took the former Moosehead 90th overall at the last draft; feel free to check out our recap of the 2011 class last year. Vancouver still retains his rights but agrees with the move as voiced by Lawrence Gilman:

He had an opportunity to go to Europe and play against men and to play for a really good hockey man in Pierre Page...We supported that wholeheartedly and we’ll continue to track him there.

He’s a late-bloomer, an intriguing prospect, that’s why we drafted him in the third round...If things go well this year, we would look at signing him next year."

tl;dr - A 6'5'' prospect is off to Europe to cut his teeth in a tough league. Good luck AG, Kassian needs some beefy company in a few years.

Speaking of Kassian, anyone remember Steve Pinizzotto? He was targeted as one of the potential fourth liners last fall (along with Byron Bitz, Mike Duco, Mark Mancari, Victor Oreskovich, Andrew Ebbett, Aaron Volpatti, Steve Anthony, Darren Archibald, Bill Sweatt, Steve Begin, Owen Nolan and Todd Fedoruk...but hey who's counting?) before a torn rotator cuff ended his season. So will he back? Anything's possible but then again there are no shortage of tweeners who can handle 5-7 minutes a game and dart between Vancouver and Chicago on a moment's whim. If he's back he'll have no shortage of company once again.

Also, as noted in the first link above, today is the deadline for signing players drafted in 2010. Sounds like Vancouver is quietly walking goaltender Jonathan Iilahti and blueliner Sawyer Hannay (which reduces Vancouver's Twitter class by one).

Hockey's Future has prospect awards for Vancouver which they published yesterday. Drum roll:

Love seeing the praise for Jensen. Gillis may have smacked another one out of the park if the Dane continues to impress in different scenarios. Ditto Connauton who could eventually help us forget Salo with his shot.

Last, but not least and not rookie-related either, all around Mr. Awesomesauce Manny Malhotra was awarded the Mississauga Sports Council's Professional Athlete of the Year. Money deserves more awards.