Drafted by the Vancouver Canucks in the 3st round (91st overall) of the 2004 NHL Entry Draft.

Edler mostly lined up on the 2nd defensive pairing for the Canucks this year, behind Kevin Bieksa and Dan Hamhuis. His most common playing partner was Sami Salo, but he played with just about every other rearguard at one point or another, including an extended stint with Bieksa at the end of the season. Alex usually played on the top PowerPlay unit, displaying a proclivity for working the puck around with the Sedins.

Edler had easily his best season as a professional, setting career highs in goals (11), assists (38) and points (49). He finished 7th overall in scoring for defensemen, and made his first trip to the All-Star Game along the way. He was voted by the fans as the Canucks' best defenseman and is the team's biggest fashion icon.

Despite a sparkling regular season, Edler did not have a good playoffs. He wasn't alone in this department, but he was the player who fell the furthest from his regular season high. Whether he was injured or just in a complete mental fog, it came at the worst time. This season aside, Edler has traditionally been one of the Canucks' most reliable playoff performers.

While it's debatable whether or not Edler is indeed the best defenseman in blue and green (I give the nod to Dan Hamhuis), his importance to the team is unquestionable, and he's easily the best PP quarterback on the blueline.

Everything about this. Not only was it a magnificent rush, it was some of the worst defensive coverage I've seen at the NHL level, leading to one of my favourite stills of the season. Derek Dorsett to everyone: "WTF?!?!" 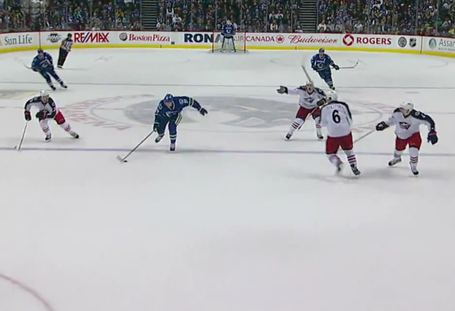 But he wasn't perfect either right?

While Alex Edler had a terrific year statistically, the faults that have followed him throughout his young career came out to play on occasion. You could argue that he is still not consistently as physical as he should be, given his Morgan Freeman-given gifts. And while he's always been praised for his calmness with the puck, it's only an asset if he follows it up with a smart play. One bad giveaway and suddenly calmness becomes carelessness. We saw this from Edler time and again in the playoffs, as he just couldn't seem to process the play when he had the puck, and he became a turnover machine, without the delicious pastries.

We've all been waiting for Edler to "put it all together", and this year he more or less did that. I've never seen the "perennial Norris candidate" potential within Edler that many fans claim to, but that's not a knock on him. There's nothing wrong with being a 50-point, top 10 offensive defenseman who can play in most situations. Despite my criticism above, I do think Edler's decision making took a big leap forward this season, so hopefully that continues.

Edler is signed until the end of next season at a cap hit of $3.25M. Another top 10 offensive season and he will easily command north of $5M. Mike Gillis, Edler and his agent can begin negotiating a new contract after July 1 this summer, and I can't think of any reason why Gillis will not attempt to lock him up to a big extension sometime next season.