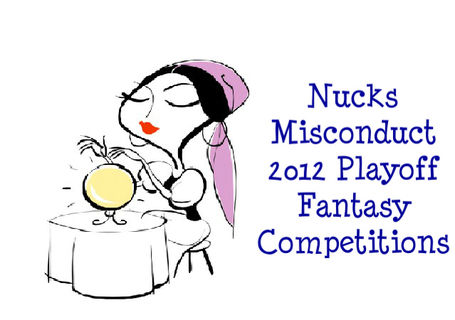 Bloody hell, what are we doing with a Kings-Devils Cup Finals? Absolutely nobody saw this coming, and it is well reflected in the 3rd round leaderboards for the 2012 Nucks Misconduct Playoffs Fantasy Competitions.

Head past the jump to see how you're doing. If you forgot who you picked, here are all the submissions for the players competition and for the brackets competition. To see how far you jumped in the standings, here are the 2nd round leaderboards.

Although kudou has the lead right now, they are not likely to hold on to it. Despite getting lots of points from players like Sidney Crosby, Brad Richards, and Claude Giroux in the earlier rounds, kudou has absolutely 0 players from the Kings or Devils. It will come down to DoubleN148 with Patrik Elias, and mattw with both Zach Parise and David Clarkson, for the final win. Nobody picked any Kings players, so that team is an absolute non-factor.

As you can see, there has been absolutely no changes, aside from 2 more columns of zeros. Wait, how can this be? Well, you see, absolutely nobody had either the Kings or Devils getting this far in the playoffs, which means that, as of those two teams making the Finals, nobody can get any more points. This means that Andrew Wade only needed 2 rounds of the playoffs to win this year's competition.