A Return to Futility - Canucks vs Oilers Gamethread

Share All sharing options for: A Return to Futility - Canucks vs Oilers Gamethread 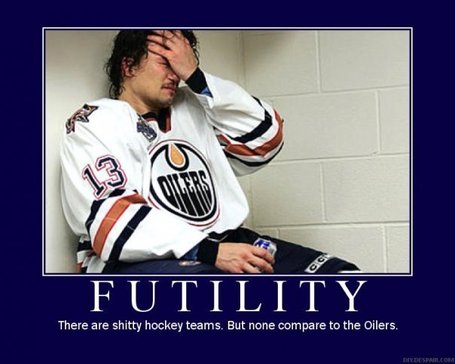 Yes, I know I used this for the 2nd game of the season, but the Oilers futility has come full circle this season. They started off better than expected, but then had another terrible crash to the bottom. Yes, I do also remember that Ryan Nugent-Hopkins got that "hat trick" in the game where I used this image before. But I don't care.
Of more importance tonight, by the time this posts, we'll have a good idea of whether our chance at the President's Trophy has been ruined by the Rangers beating up the Capitals. By the end of the night, we will also know whether the Canucks will face the Coyotes or Sharks in the 1st round.
Speaking of the playoffs, a quick note on the fantasy playoff competitions. As soon as all the games are done tonight, I will be putting up the two sign-up sheets for the NM playoff fantasy competitions in the fanpost section. When these go up, everyone has until the scheduled start time of the first playoff game to post their picks.