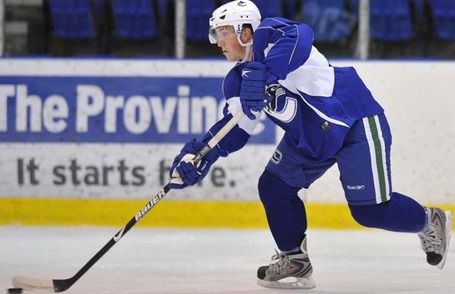 As the Chicago Wolves push to qualify for the Calder Cup playoffs, they were able to grab 5 out of a possible 6 points in the past week, leaving them in first place in their division and the current 3rd seed in the conference. As far as the western conference goes, only one team (Oklahoma City) has clinched a playoff spot and the rest is basically wide open. The Wolves have 82 points in 69 games and while I do think they’re playing well right now, there’s a very real chance they could miss the playoffs if they go on an extended losing streak during their current road trip.

Last week, the Wolves played two games in Abbottsford and our good friend, The Stanchion, was on hand for both games, as it’s nice to get someone else’s views on the team, I asked him some of his thoughts on what he saw during those two games. Enjoy!

Q: What was your overall impression with this team from seeing them early in the season until now?

A: The intensity of the games I saw earlier in the season compared to the games I saw last week are like night and day. The first time around the Heat didn't put up a fight, so the Wolves pretty much had their way with them. This time around both teams were far more physical, and both teams looked far more involved in the games. This was highlighted by the Kris Kolanos doing what can only be described as a Michael Jackson like celebration after scoring a goal on Friday, which was later matched by Mark Mancari doing a huge fist pump and arms wide open celebration later in that game.

Q: They’re currently 4 points from being out the playoffs, but I expect the Wolves to make it, do you think this is a team primed for a long playoff run?

A: It's tough to say. The Wolves have the one of the worst powerplays in the league, but they managed to get it going against the Heat. If they can turn that around, it will help them tremendously. They will also have to work on their discipline because they took a lot of needless penalties in the two games I saw. I think if they tighten up defensively, they could make a long run, because they do have great goaltending, but that's easier said then done. Many of the goals the Heat scored were due to bad defensive breakdowns, especially when it came to trying up their guy in front of the net.

A: Mark Mancari has an NHL shot, and boy is it fun to watch him use it. If he just had speed in his game, he would be in the NHL by now. I really think he could make it on a team like or another team that had some room in its bottom 6 and had a spot on their PP for him, but sadly I don't think he will ever make it to the NHL on . He looks like a leader on the ice, and is very intense when he plays (as noted by his awesome Ryan Kesler-esque goal celebration) and offensively he is very smart. Defensively, he could use some work (he has a tendency to float and wait for his team mates to get to loose pucks in the defensive zone) but in the offensive zone, he is really good. Also, his shot can light the net on fire. I'm sure of it.

Q: Who was your MVP on the Wolves for the two games?

A: I want to say Mancari, as he almost was, but for me, it was actually Jordan Schroeder. He impressed the hell out of me with his play. Just used his speed to create chances all night long, and defensively was very smart with his play. Even in a physical game like the two I saw, he didn't disappear, he fought through it and had an impact in both games. Part of me hates Schroeder for stealing that title away from Mark, but I will learn to live with it.

Q: Eddie Lack has looked much sharper as of late, did he give you the same impression?

A: Lack looked really good. He was always following the puck and staying square to the puck. It was hard to fault him for many of the goals that were scored against him. And in the shootout? He was a brick wall in net, he gave the Heat NOTHING to shoot at, it was awesome to watch. The thing that really stood out was honestly the way he was always following the puck and making himself big in net. I don't think I saw him lose track of the puck once in the game he played. I think he turned his game around once he started eating the Swedish meatballs at Ikea.

A: That was my favorite line to watch. Sweatt has NHL speed but struggles with the puck control at times, but he still makes a positive impact in the games he plays in. Schroeder, as I previously discussed, was great at both ends of the ice. And Davies fits right in with those two, creating a headache of speed for any team they face.

Q: Do you think Mark Mancari did anything cool during his two games?

A: I jumped the gun on this one, but the goal celebration was honestly hilarious, it was a giant "Eff you!" to the Heat when he tied the game up at 3 in the second game. Also, anytime a scrum happened Mancari would wander in and the Heat player he approached would suddenly calm down. That made me laugh every time.

Q: Jordan Schroeder is the 3rd leading scorer on the Wolves, did he give you the impression that he’s ready to come up and play with the Canucks next season?

A: Depending on if there is a spot on the Canucks, I could see him making it. I wouldn't mind him having another season with the Wolves to be honest, but if they needed him, I think he could play for the Canucks. I don't know how much AV would play him, because you never know which rookie Vigneault will randomly hate, but defensively I think he is miles ahead of Cody Hodgson, and offensively, while he isn't as smart as Hodgson, but he is still very good.

Q: Did any non-canuck prospects on the Wolves impress you?

Tim Miller! That guy has earned himself a contract in my opinion. Just a good overall player who doesn't make very many mistakes. I wouldn't be surprised if he gets a contract next season.

Q: Can we please have Chris Tanev back for the playoffs?

A: No, but you can have Keith Ballard, since I am pretty sure Alain Vigneault still hates him.

Many thanks to the Stanchion for taking some time out of his busy schedule to tell you fine folks about his take on the Wolves.

Player News – Frank Corrado – D – Frank has been assigned from the Sudbury Wolves to the Chicago Wolves, and will provide further depth along the blue line. He’s said to be a little undersized, but very quick and has good instinct when moving the puck, so it’ll be interesting to see how he fits in when dropped into the middle of an AHL playoff chase. You can follow him on Twitter @frankcorrado22.

Coming this week – The Wolves are coming into a very tough stretch in the season right now. They begin this stretch by playing San Antonio tomorrow night, the current western conference 6th seed, who have owned the Wolves all season, and then games at Houston (currently 7th in the west) and Oklahoma City (Currently 1st in the west). As you can see, these are all teams that if the season ended today, they would all be in the playoffs, these are the teams the Wolves are going to have to beat if they’re going to make a run this post season.