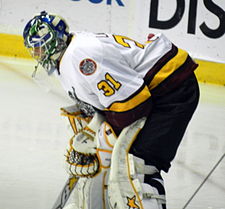 The Chicago Wolves managed to stay alive last night, holding off the San Antonio Rampage 3-2 in regulation to win their first game of this best of five series. Eddie Lack stopped 18 of 20 shots, Darren Haydar scored twice and Jordan Schroeder scored once to keep hopes of the reverse sweep alive.

The Wolves caught a bit of a break with Jacob Markstrom being called up to the Florida Panthers through at least their game 7 with New Jersey, but the defensive play was much better in game 3 than it had been previously. I would also like to personally thank the Canucks for letting us have Byron Bitz back, if only for a few games.

Hopefully the baby Canucks can pull this one off tonight, and give me something to do on Friday night (other than drinking at a dive bar). I'll be live tweeting from the game tonight, so follow me @ggooglyboogly and lets cheer on the Wolves!