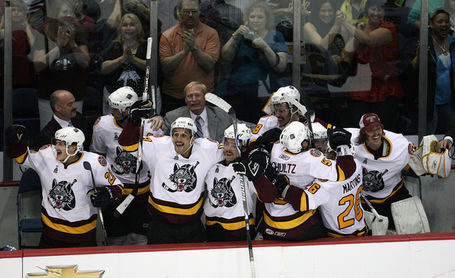 The Chicago Wolves hope to look like this tonight as they begin their journey to the Calder Cup against the San Antonio Rampage (AHL Affiliate of the Florida Panthers). The Wolves lost all four meetings with the Rampage this season, with each game being a one goal loss. San Antonio goalie Jacob Markstrom is one of the best in the AHL, pair that with Eddie Lack going for the Wolves and goals will be at an absolute premium in this series.

The first two games of this best of five series will be in San Antonio, followed by the final three in Chicago

For those of you who want to watch the game tonight you can via ahllive.com for $9.99 for a single game (I will be doing this). If you want to save $9.99 just follow me on twitter (@ggooglyboogly as i'll be live-tweeting the game to keep you all informed.