Share All sharing options for: Canuck Brunch- Shut Up 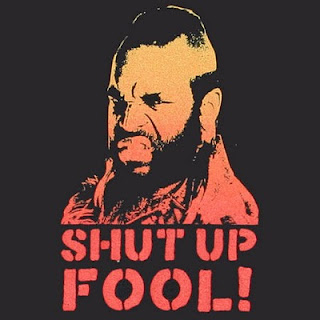 While my good buddy Harrison Mooney thought that this playoff season might bring some respite from the sea of Canuck hatred, most of which veers into the 'irrational and ridiculous' neck of the woods, I am not shocked at all by seeing it cranked up this intensely right off the bat. From newspapers in Toronto fighting the Leafs' battles for them by launching strikes against the Canucks about who's the most hated. Or the other Hogtown rag that suggests Canada would be better served by cheering for the Sens, one reason given was the Daniel and Henrik Sedin have never been forced to take a snowmobile to practice. The same tired narratives trotted out, all under the battle cry of "Canada hates the Canucks the most!!!!1!!" despite polls that show a rather unsurprising different story. Add in the hypersensitivity to any criticism of the Canucks by our fan base (case in point, the LA Kings tweet nonsense. It was very unprofessional, no doubt. It's a credit to the Canucks social media guy Derek Jory that we don't have to worry about being embarrassed like this) and it's already wearing me down. So to all the braying jackasses out there (and yes, I have a few to list off...) I have just one message... SHUT UP!

Canucks Fans- Bloody hell. Not everything is an outrage. Canadians are known for their sense of humour, and dammit you need to remember this. There are some funny people out there, with some witty, truthful knocks at our boys, and us. Stop losing your minds over everything that's said. Obviously not everything's gonna be onside during the playoffs (right, Daniel Briere?) but we're one game in. Pick your battles. Pace yourselves. And for the love of god, buddha or whoever... ACT LIKE YOU'VE BEEN THERE. We went through an amazing experience last year. You know what to expect. Stop acting shocked when the bubbling pond scum of the hockey world try and up their hit counts and pander to their own fan bases at our expense. Ignore it. Laugh at it. In a lot of cases, feel sorry for it. The hate comes from jealousy, we all know that. Giving them more reasons to hate helps us how, exactly? The Canucks have gone out of their way to encourage people to celebrate this playoff run in a far more responsible manner. Some of you would do well to take that mentality online. Relax. Sticks and stones, right?

The Damien Cox's of this world- Stop embarrassing yourselves. I don't feel anger when I see you spew your vile and as we've now seen, inaccurate nonsense, just pity. I get it. It's gotta be frustrating working in a market with high expectations that cannot be met. The issue is that your constant reliance on the lies you spin degrade the memory of great hockey journalists past, and those who work tirelessly to bring us inside views of the game we love today. In this modern era of instant and previously unimaginable access, we've become addicted to the amount of news we can get. The pressure is there to be the first and best with stories more than ever. This is also the internet world. We live in the era of the troll. The internet has made civility, respect and integrity outdated concepts. It's unfortunate that we can't even expect to see it from the former standard bearers of it. The best advice I can give, is the headline tells you all you need to know. If the author has gone down this path before, why bother? There are few, if any out there who have something new to bring to the table. We've seen all the Canucks hate from them, and know that nearly all of it simply isn't true. Giving your ear to a troll ensures he doesn't go away.

CBC's coverage- We also learned last year that the various intermission panels (hell, this has been going on for a couple years now) are simply not going to present the Canucks in a positive light. Whether it's bias, pettiness, ignorance... it doesn't matter. It's disappointing to see guys like Craig Simpson expend so much energy into blatantly pushing a narrative the way he has. Ryan Kesler aside, the Canucks were hardly more involved in embellishments than the Kings were. So why the one-sidedness? This is not complaining that the HNIC is being biased against the Canucks. It is however an expression of frustration that there's a narrative being pushed at all. As one of the millions who grew up watching Hockey Night In Canada, our knowledge and passion for the game owes a lot to how it's been presented to us over the years. Perhaps it's a coincidence, or more just a sign of the times, that they even bother to be involved in the pushing of narratives, the pitting of one team against another. The thing that set Hockey Night In Canada apart from regional broadcasts was that it was all encompassing. When Foster Hewitt greeted fans, he included those watching in Newfoundland (back before they joined Confederation) and the United States because all were welcome, regardless of who played. Sure it was simpler to accomplish this when it was a 6 team league, but through the expansion years, this mindset remained. Now we HNIC talking heads battling for the hearts and minds of viewers by pushing nonsense that a country should cheer for one team over another, and that one team doesn't represent Canada. There's only one team that represents this country. It's not in the NHL. Let's also not forget that much like other teams, Canucks fans are found around the world. Watch a road game. See how many Canucks jerseys you see in the crowd. We're everywhere. We're Canadians (and Americans, Swedes, Finns, Germans... and many others). And all we want is to be shown the same respect you show the others. You know, the way you did for decades before.

There's a lot of chirping going on. Some it good, some of it not. I can't see how freaking out to the most innocuous of statements is fun for some of you. Just breathe. The Canucks motto for the playoffs is "This Is What We Live For". You'd do well to remember that and actually spend time enjoying the fact we have a team that can give us the kind of Cup run every hockey fan wishes for. People are going to take shots. They're mad, jealous and bitter a lot of times. Remember: We've been where they are. We've had those miserable kinds of years. Show some humility, and dignity, even when they aren't. The shoe will be on the other foot someday. And karma's a mean bitch. Keep her on your good side.

One last thing: I do find it amazing I didn't have to talk about the goalies :)

KICKASS PLAYOFF BATTLE HYMN OF THE GAME- Shut Up by D.R.I.

A message to those who need it, and here's to the Canucks doing on the ice what they need to do to send this message to their critics and the Kings.