Canuck Brunch- What Are You Fighting For?

Share All sharing options for: Canuck Brunch- What Are You Fighting For? 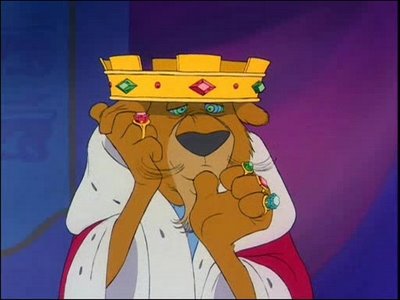 When is a King not a King? Well much like our buddy Prince John up above, the Canucks are starting their quest for the Cup against some pretenders to the throne. The defending Western Conference Champions are set to face the Kings for the 2nd time in 3 years. That last matchup was LA's first appearance in the post-season in 8 years, and while some say the team's improving, it's just as easy to say they're spinning their wheels. This is a team that finished a spot lower, and with three less points than last year's squad that bowed out to the San Jose Sharks in 6 games. They had a chance to win the Pacific Division down the stretch, locking up 3rd place and home ice in the first round. And they lost two huge games to the Sharks in the last weekend of the season. Those combined with a shootout loss to Minnesota earlier in the week are why they're in Vancouver tonight and not at home against Chicago. Clutch games to help determine an opponent they match better against and they come up short. Remind me again why they're going to knock off the Canucks?

Here's the thing, it's not like we don't know about their strengths. They have a solid, smothering-type defensive corps, and Jonathan Quick turned in one of the best goaltending performances of the season. The problem here is goal scoring for the Kings. Why haven't they been able to score more? It's not like they don't have the talent. Only the lowly Minnesota Wild scored less than them this year. Yes, even Columbus scores more than LA. So they get by on keeping it close and trying to capitalize on the mistakes of their opponents. You know, like Dallas and Minnesota. The only difference is, LA's goaltending is better.

This style, and their success at playing it has many predicting doom and gloom for the Canucks. Let's be honest here, we're in playoff mode. In playoff mode the teams put up a veil of secrecy about injuries and lineup changes, while media guys throw away things like impartiality and integrity when it comes to certain teams. We all saw the knives come out for the Canucks last season, and it will be no different. The Canucks were 4th in GA this season, but you'll hear that the Kings have the advantage. Pardon me while I take a page from the book of the haters, but there's a factor here that's being overlooked, and it's experience. The LA Kings have won a whopping 4 playoff games in the last 2 years. Vancouver rattled off 15 last year alone. Quick, much like the Rangers' Henrik Lundqvist, hasn't proven anything in the post-season. It would be nice to see these goalies start to get even a portion of the criticism that's piled on Luongo (remember, heading into last year the knock on Luongo was he couldn't get past the 2nd round).

The Canucks may not have been as dominant on a game by game basis as they were last season, but I believe part of that reason was the adjustments they made to their style. How many close games were the Canucks in this year? Look at their schedule and you will see a ton of 1 and 2 goal games. They're built to get through teams like this. They've done it all season long. It's been a fine tuning process, and there were some hiccups along the way, and we saw far too many shootout games this season. It really does feel like Alain Vigneault and his staff have been grooming this team for war, and they had the opponent's battle plan all along.

The big news for tonight is the breaking story this morning that Daniel Sedin will in fact not be in the lineup tonight. An interview with the Twins' father confirmed he is still sitting, and suffered headaches after practicing Monday. It's a concern, because it certainly doesn't fill one with optimism that it's just a matter of sitting out one more game. This is sure to cause a sense of panic to set in amongst some Canucks fans, but remember that they lost just one of the 9 games that Daniel's missed since the vicious elbow to the head from Duncan Keith. As the games missed count now hits double digits, and double the amount of the suspension Keith received from the NHL, it's becoming apparent just how lightly Keith got off.

And so it begins. It's hard to believe that it's been 10 months since the hopes and dreams of Canucks fans worldwide went er... up in smoke. I see people still unable to see images of the Bruins raising the Cup. For me, it's not painful now. Last year is officially over. The chance for rebirth begins now. Embrace The Hate, but don't let it distract from enjoying this. Last year was a learning experience for the Canucks, and definitely for the fans. Let them say what they will. We know it's coming, and as we saw all year long, all the things they claimed about this team were dead wrong. They're good enough, they're tough enough... and doggone it, we don't give a rat's ass if you hate us. A new dawn presents new dragons to slay. Be warned, the Canucks are ready.

KICKASS PLAYOFF BATTLE HYMN OF THE GAME- 1312 by ZIMMERS HOLE

Not just this game. Not just this series. This song is my battle hymn for the playoff run. Vancouver's own Zimmers Hole with an anthem that sounds tailor made for them.

Once proud and fearless, what have we become?
End the time of weakness, we know what must be done
Rise above a simple purpose, time you know the score
Either you're the Master, or just another whore...

What's your Quest?
What are you fighting for?
Is that your best?
Just give a little more...

From the smoking ashes, a tribe of Lordes will rise
Vengeance will rain down from the Northern skies
Into the frozen North upon the mountain high
You cannot run from truth, your blood you can't deny

See the demons fly way up there in the sky
Lightning bolts they strike and you must wonder why
Never fear my dear because The Hole is here
Wipe your tears you puss, you might just worship us!

All paths converge, heed the call
Purpose and Might, we'll claim it all
It's yours by right, watch the palace fall