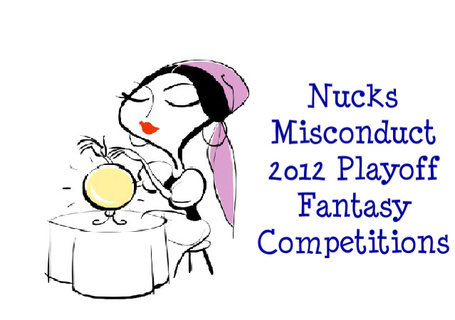 Introducing our new fortune teller. She has nothing to say yet.

UPDATE (Monday at 4:30 pm PST): After some discussion in the comments, I have decided to alter my suggested format for adding goalies to the players competition. We will keep the part about losing points whenever your goalie lets in a goal. However, you can now earn points from your goaltenders: 2 points for a win, plus 3 bonus points if that win was with a shutout. For example, a 5-0 win would earn you 5 points, a 2-1 win would earn you 1 point (2 for the win, -1 for the goal allowed), and a 3-1 loss would make you lose 3 points.
If you haven't voted yet, this change should be considered in your vote. If you already voted, and want to change your vote, leave a note about it in the comments.

As most people here would remember, I organized some playoff fantasy competitions here on the blog for the last couple of years. Well, now it's time to start planning the 3rd edition. Last year's competitions went quite well, but I have a couple ideas for making them more dramatic, one of them in particular being perhaps a little bit too bold.

By the way, yes, I do realize that I had never gotten around to posting the final round's leaderboards last June. That is now posted, right over here.

First, let's recap what the two competitions were like last year. You can click the titles for each competition to see examples of teams and brackets selected.

Although these formats worked well last year, there are a couple things I think could be changed.

First, the brackets. When finally putting together last year's final round leaderboards last week, I noticed a couple things about how the point scheme was working. I realized that calling a team to win it all should have more of an effect than just calling a bunch of the 1st round series correctly. Therefore, I propose this new point scheme:

I believe these changes will help the brackets.

Now, for the players competition. The format works well, and the points work well, but I came up with a brilliant, bold twist to add. You will still pick 14 players from the 16 playoff teams, but 2 of these players (no more, no less) have to be goaltenders. Here's the tricky part: for each goal one of your goalies lets in, you lose a point. (Monday update: You will now earn 2 points for a win by your goalie, plus 3 bonus points if it's a shutout win.) A couple of rules need to be implemented here.

Your other 12 players will be skaters as before, earning you points with every goal and assist recorded. You will still need to have at least 2 defensive players, and a maximum of 700 regular season points from your skaters. Your goaltenders will still count towards your maximum of 2 players from the same team, so no Luongo/Kesler/Burrows combos.

Now, obviously some of these changes may not float everyone's boat, which is why I'm putting these changes up to a vote. On the poll below, you can select which combination of formats you would like. If you have other suggestions, list them in the comments, and they will receive consideration. I would put the option of "other formats suggested in the comments" on the poll, but the people who select that option in the past never put anything in the comments, so screw that option.

After the final game ends on Saturday April 7th, and the playoff matchups have been decided, I will put 2 sign-up posts (one for each competition) in the fanpost section on the right-hand sidebar of the blog. There, you will find the final formats and rules for each competition, and you can put your picks in the comments on those posts. The deadline for entry will be the scheduled start time of the first playoff game on Tuesday April 11th.