Whether you're feeling the effects of a big win and the celebration that followed, or you're just crushing as much caffeine as you can to make it through the day, everyone needs a good buzz in the morning. Here are your links, images, bad Photoshops, out-of-context quotes and wild generalities for Tuesday, March 6, 2012.

Mason Raymond has had a tough year. With Zack Kassian starting on Kesler's wing tonight in his place, his search for a spot in the lineup continues. I actually think a 4th line of Lapierre - Malhotra - Raymond has some terrific potential. (PS – Brad Ziemer deserves a throat punch for this headline. Creativity is the one area where there's no comparison between the blogs and the mainstream media.) [Vancouver Sun]

Maxim Lapierre gets some much-deserved love. He's up there with Hamhuis in the "most important Canucks that are rarely talked about" department. [Rob the Hockey Guy]

Even after defeating the Chicago Blackhawks in last year's playoffs, Roberto Luongo is still haunted by their brutally vague fan signage. [PITB] 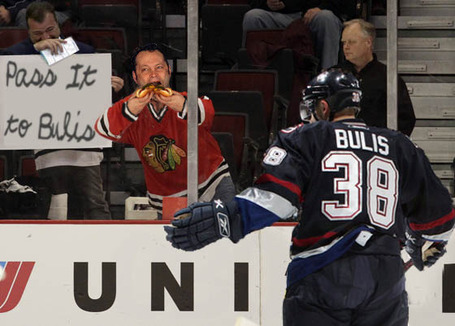 Roberto Luongo is the Last Man Standing. Unless of course you fake backhand, in which case he's the First Man On His Belly. Ooooh! I keed, I keed. [PITB]

Mikhail Grabovski has signed a five-year extension with the Maple Leafs, worth 5.5M per acccording to Elliotte Friedman's Twitter.

In the wake of an injury to Tuuka Rask, the Bruins have signed Marty Turco for the rest of the season. Since he has to clear waivers, what do you think the chances are of a Boston rival claiming him? I've always wanted to see some GM pull a total dick move like that. [TSN]

The Penguins beat the Coyotes last night for their 6th straight win, and somehow vaulted the Stars into first place in the Pacific Division by doing so. What's happening to the Sharks?! They're in 8th! Also: the Penguins are good. Fear them! [PHT]

Steve Yzerman will once again be the architect behind Team Canada's 2014 Olympic team, whether NHL players are there or not. WAY TO GO STEVIE BOY! (thumbs up) [Sportsnet]

The playoff race in each conference is insane, and is only going to get nuttier. Here are five teams to watch in the East. [NP]

Here's a terrible and not very funny rap video about Ilya Bryzgalov being the world's greatest hockey philosopher. [Puck Daddy]

The best in NHL player tweets, courtesy of The Stanchion. [Legion of Blog]