Behind The Numbers: Do the refs put the whistle away in the playoffs?

Share All sharing options for: Behind The Numbers: Do the refs put the whistle away in the playoffs?

Power Plays are down! Scoring is down! ! And, it's only going to get worse in the playoffs!

This is all bad news for the Canucks who rely on the PP. Well, let's take a look Behind the Numbers to see what we can expect when the 'real hockey' starts.... in 12 days....

By now we are all aware that the referees have drastically stopped stopped calling penalties. Warning!..It's chart day!! So let's remind ourselves of the overall declining trend since the lockout.

{all stats from nhl.com) 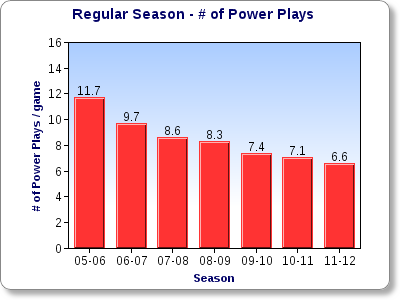 As we can see Power play opportunities per game have nearly been cut in half (down 43%) in the past 7 years. One would expect that the same trend would take place in the playoffs: 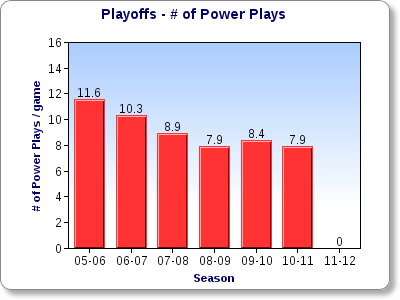 Yes! We have the same declining trend. So, there is no surprise thus far. One of hockey's prevailing myths is that the referees always swallow their whistle in the playoffs. The prevailing argument being that the refs don't want to decide close games and during the playoffs with so much on the line we should expect significantly fewer penalties. Let's take a look: 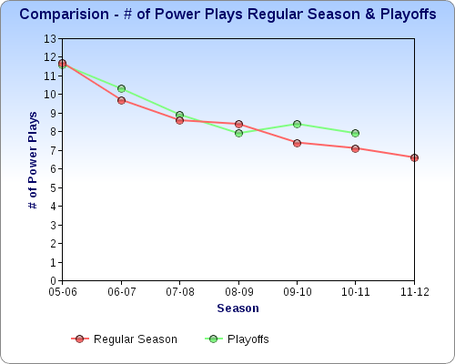 Surprisingly, this is clearly not the case, the refs are not calling fewer penalties in the playoffs than in the regular season.Even though, the stakes are higher, and games ought to be closer and harder fought. And, during a time when every call is scrutinized by the critical judgment of players, coaches, management, fans and media.If the trend continues this is a little good news for Canuck fans in that it appears we have seen the worst of the 'letting them play' mentality.And, the team has had significant time to adjust to the new standard?

Along with the drop in power plays, there has been a corresponding drop in goal scoring with some observers lamenting a return to the 'dead puck era'. Let's take a look: 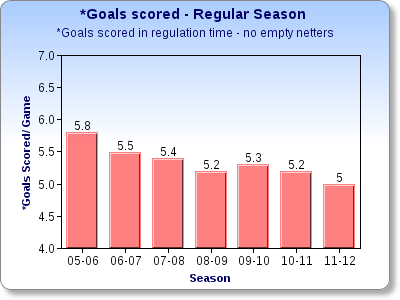 Once again, a clear declining trend. This is disappointing for fans of the new NHL and its promise of wide-open, exciting,goal producing hockey. Has lower scoring carried over to the playoffs? 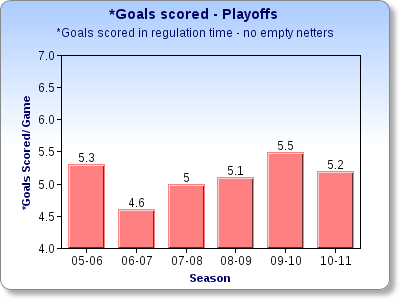 Well, not really. It is important to point out that the playoffs represent only a fraction of a regular season so sample size is an issue. However, that being said, there has not been a drop in a corresponding goal scoring in overall the playoffs.Because of the few number of games, goal scoring averages appears to be primarily driven by the type of team that is successful in a particular playoff season. In 06-07 the Anaheim Ducks, with two Norris trophy winning defencmen (Pronger, Neidermayer),and a great checking line (with our own Samuel Pahlsson) played a really tight shutdown game. Whereas in 09-10. the high flying Chicago Black Hawks succeeded by gladly trading high quality scoring chances with their opponents in their march to the cup! 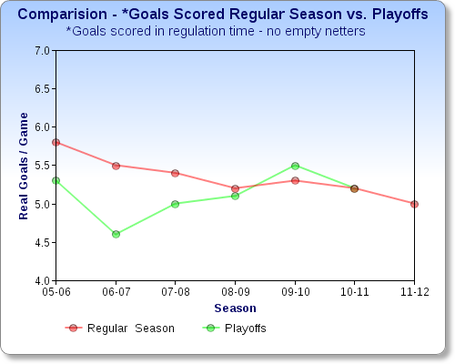 The first three years show a reduction of goals in the playoffs, whereas, in the last three playoffs have been virtually no change.Let's break down the goals further. We know power play ooprtunites have declined so we expect power play goals to show a similar trend: 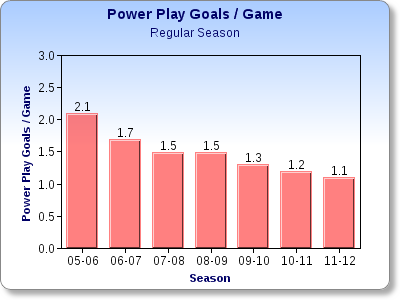 That's what we have. Power play goals are down ~40% since the lockout. And, in the playoffs: 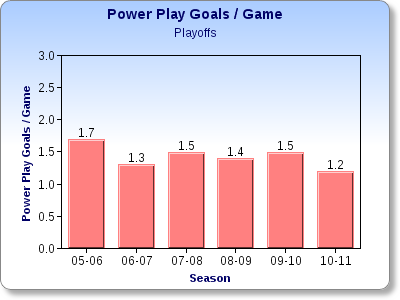 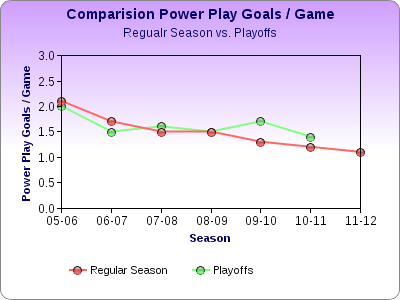 Nope! Virtually the same rate. And, I also checked the PP% efficiency and there was no observable difference. Have you seen enough tables?! Okay, just three more. Let's check 5 on 5 hockey since this is the state where most of the game is played.

(* For ease of comparison between regular season and playoffs the totals are in regulation time excluding empty netters): 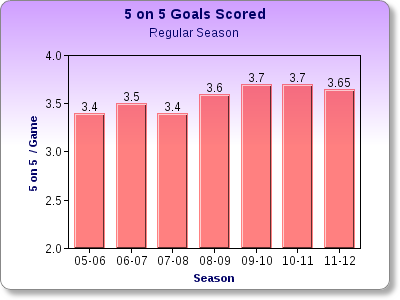 This increasing trend makes sense,since power play time is decreasing and therefore more of the game is played 5 on 5, hence more goals: And in the playoffs? 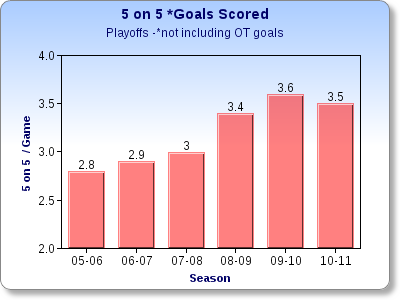 A similar trend, again with the small sample size, we also see the "impact of the style of play by the Stanley Cup winner" that I mentioned earlier. Chicago 09-10 lead the way with the highest total.Finally, let's compare the two graphs: 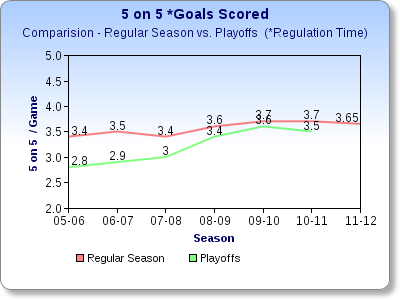 As we saw with total goals scored, the first three years showed fewer goals and the last three much closer.

What does all this mean for the Canucks? If the trends continue then we can use the last three months of 'let them play hockey' as our baseline. This should be as bad as it gets. There is even a chance a few more calls could take place but a further drastic reduction come playoff time is unexpected.

In the next post we will look at the importance of 'goal scoring' in the playoffs, to see if the Canucks have what it takes to win the Cup! Tell us what you think?