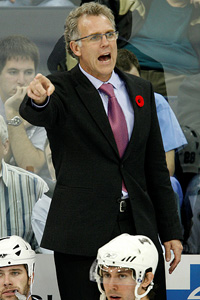 The Chicago Wolves playoff push continued last night with a 4-1 win over the current 5th seeded Houston Aeros. As of right now, the Wolves have the 3rd seed as a Midwest division leader with 79 points. Charlotte is sitting at 6th in the conference (2nd in division) at 75 points with a game in hand and Peoria has the 9th seed in the conference with 75 points (Wolves own a game in hand against Peoria).

Since the last update, the Wolves have won 4 games and lost 2, they are starting to play quite a bit better but there are those games where there is a frustrating lack of effort that have me wonder why I’m sitting in the stands watching them play if they don’t want to be out there. For the most part, these games don’t happen often, and with the effort and skill I saw last night, I think the Wolves are primed for a successful playoff run. Both goalies have been playing very well. Since the 6-0 drubbing at the hands of Milwaukee at the beginning of the month, the Wolves have given up 4 goals just once, and are averaging 1.9 goals against.


Coming up this week the Wolves have another trip to Abbotsford to play the Heat, so any of you reading this should head out and catch a game or two and cheer on your future Canucks. The games are Thursday and Friday night. Last time the Wolves played there they had a two game sweep. Points are at an absolute premium here with the western conference being so close and another two game sweep in Abbotsford would do wonders for securing a playoff berth.

Player News – Goalie Joe Cannata will officially join the Wolves in Abbotsford and remain on the team through the rest of the season. With the playoff race so close I don’t think he’ll see much, if any, playing time, but it should be good for him to practice with the team and get used to traveling in the AHL. The goalie picture gets a little murky for next season, but I think whether or not Scheider gets dealt from the Canucks, it makes more sense to keep Eddie Lack in the AHL playing regularly than warming a bench in the NHL.

Brad Hunt – D – Bemidji State’s Brad Hunt has been signed by the Wolves to an Amateur tryout contact and is a solid prospect that I feel will earn a two way deal next season. He’s been put on the power play right away, has a BOMB of a slap shot and has played great in both zones. Whoever signs him next year will have a very productive blue liner, I wouldn’t mind watching him next year in Chicago so start tweeting his name to Mike Gillis, Canuck Fans!

Darren Archibald – LW – Darren has been given the rookie of the year award from the Kalamazoo Wings during last night’s Fan Appreciation night event. He had 11G 29A and a +18 rating this season with the K Wings. He’s had two stints with the Wolves this season and I saw a drastic improvement between the two. I think it’s a pretty safe bet that he’ll be a mainstay on the Wolves next season.

Prab Rai - F - A lot of you have asked about Mr. Rai, he's actually suited up for the K wings alongside Darren Archibald for 21 game this season sporting a 1-4-5 stat line. It will be interesting to see where he will wind up next year fully healthy, a good chance it could be up in Chicago