Share All sharing options for: Morning Buzz: Canucks back in town as division champs; Sid & AO shine like old times

So the Vancouver Canucks walk away from a 4 game road trip with a 2-1-1 record, only 2 points behind the Rangers and 4 behind St. Louis with a game in hand. Not bad, considering if all you had been doing is reading the Vancouver columnists over the past week, you'd think they were a lottery team this year.

The club put together two gutsy road efforts after losing their best player indefinitely — just another obstacle that should only serve to bring this team even closer together as we count down the days to the second season.

Go into the Canucks' dressing room after their big comeback win against the Avs on Saturday. Highlights include Alex Burrows' completely nonsensical yammering, and yet another Chris Higgins ab shot. He's doing this on purpose now.

Contrary to what CBC was reporting for most of the night, Vancouver clinched the Northwest Division when Calgary lost to Dallas in the early game.

Ben Kuzma with his Canucks Hat Trick, including thoughts on Higgins' resurgence, the battered blueline and the chances of another President's Trophy. | The White Towel

The club gets back at it against the Kings tonight at Rogers Arena. Check the preview. | Canucks

As we all know now, Duncan Keith was suspended for 5 games on Friday for his elbow on Daniel Sedin. The only way that justice would have been served is if the suspension included a playoff game, but alas, Brendan Shanahan fails to make any sort of meaningful statement here. | Smug Nation

A few of the dads on the Canucks offer up some advice to soon-to-be father Mason Raymond. My favourite is Burrows' suggestion of naming the little boy Raymond Raymond. I also like that Mase points out that him and his wife are expecting a "little boy", as if it was possible for his wife to deliver a full-grown man. | PITB

Hey remember Andrew Ebbett? He's getting close to returning to the lineup (if he can crack it). | The Province 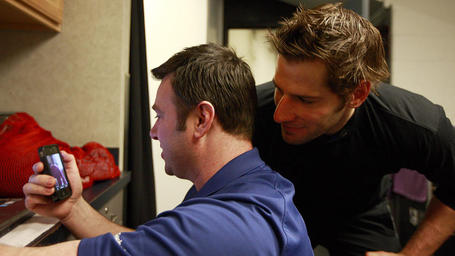 [1997] Gino Odjick passed his previous record and Canucks record of 370 penalty minutes in a single season (1992-93) by recording his 371st penalty minute (fighting) in a game vs. the Anaheim Mighty Ducks. Odjick's 371 penalty minutes made him the NHL's most penalized player during the 1996-97 season.

[2002] Trevor Linden plays the 1000th game of his NHL career. Through his first 1000 games, Linden played 758 games for Vancouver, 107 with the New York Islanders, and Montreal Canadiens and 28 with Washington. Linden becomes the fourth player to reach the milestone while with Vancouver (Dave Babych, Ryan Walter, Pit Martin).

[2002] Goaltender Dan Cloutier sets a new club record with his seventh shutout of the season, posting a 4-0 win over the Los Angeles Kings.

Brian Elliott and the Blues shutout the Coyotes last night. It was Elliott's 8th shutout of the season, and St. Louis' 14th, a new club record. Didn't Steve Mason and Pascal Leclaire each pitch 10 shutouts under Ken Hitchcock? The guy has the magic formula. | CBC

The Senators and Penguins were in for a treat on HNIC on Saturday, when Miss Piggy sang the national anthems. Even Sid cracked a smile:

Did you see the goal that Crosby scored yesterday? Ridiculous.

Alex Ovechkin is also on fire these days. It's almost as if he was waiting for Crosby's return to announce "you know what? I'm still pretty good too." | Sportsnet

The collective mind of the Anaheim Ducks is thoroughly boggled after a disallowed goal against the Bruins yesterday cost them the game. | PD

[1917] The Seattle Metropolitans beat the Montreal Canadiens 3 games to 1. Seattle becomes the first US team to win the Stanley Cup.

[1975] The Washington Capitals record their 37th road game without a win, and NHL-record 17th straight loss.