Get Off My Lawn - I Like The Cut Of Your Jib

This time last week seems a world away doesn't it?

A win over Columbus with rival Chicago on deck and a pair of battles against those scrapping for the bottom seeds rounding it out. The NW title within grasp. More or less, all seemed pretty innocent.

Well think again junior. Three games later the NW title is back home, our leading scorer is in the quiet room and those wanting to see a fire lite under their collective asses saw just that when they put a dent in the playoff aspirations of Dallas and Colorado.

We gave Dadberg the day off to be a dad because even us old fucks have a heart. So old codgers Kent and YC rant away on the week that was.

OUR LOVE IS RIGHT...

Grandpa Kent Cracked A Toothless Smile: In a season so filled with doom, gloom and negative connotations, if you were a non-hockey person and saw what's been said about the Canucks this season, you'd likely be stunned to see just where they are in the standings. Yet here they sit, as terrible as they are a mere 2 points back on the Rangers and Blues, with a shot at back to back President's Trophy wins. And if you think this is not significant, you need to shut off the part of your brain that acknowledges internet trolling as though it somehow matters and listen to fact: If you believe for one moment that winning top spot in the regular season meant nothing in the Canucks playoff run, you're wrong. Home ice advantage the entire way is huge, and was a factor in every series the Canucks played. Depending on the roll of the dice that is the playoffs the Canucks could not finish first and still get it the whole way, but why leave it to others? Determine your own destiny. In the wake of the Keith/Sedin debacle, one thing has become clear: the Canucks aren't gonna take shit from anyone. There are some who are still bemoaning a so-called lack of response on Wednesday, but the fact of the matter is they did everything they could without severely punishing themselves to get back at Keith. They then stood up to 2 straight opponents who spent their entire games taking liberties against them, responded appropriately and walked out of the building with wins. It sucks that this is what had to happen to spark this team to life, but after sputtering through March, 2 straight wins and points in 3 straight as they head home to round out the season, leaving Rogers Place just once for a quick jaunt to Calgary, this team looks as though, even without Daniel Sedin that things are falling into place, and just in time.

Yankee Canuck Drops His Applause When: I know a man named honey badger who just don't give a shit. Example A:

I know I've used this space before to blow my old man wad (yes such a thing exists and yes it involves moths) on third liners, but the guys who aggressively forecheck, own the boards and cause players like Olver to clutch their Green Lantern blankies at night make my heart beat like that of a ripe 50 year old. It's why Kesler was the original man crush, my Higgins crush is starting to challenge him and Beaker is always there too - silently in the background - ready to usurp Michael Laudrup as Denmark's most awesomest sports athlete that ever was. Guys like Vancouver has now makes you forget the team ever actually hired names like Bernier or Isbister (shudder). In fact last night's game winner is just about the prettiest goal this side of the Sedins usual manhandling of Edmonton's defense.
So it's only fair I break rank to offer my most sincere senior apologies - which I'll forget I did in five minutes - to Mason Raymond. Generally speaking he's not a player I'm enamored with despite his herculean comeback from a broken back (Chicago fans would call this 'diving'); I was all too willing to jump on the bandwagon to slam the guy's lack of offense. But three points (2-1) in the last two chippy games gives me faith he can still be a top six threat. He may never be the lunchpail-type guy, but his finesse and finish were on display this week after his benching and he responded perfectly. When a team is struggling offensively, Ray delivered.
Also, he likes dogs. If you don't swoon at this pic below you're kind of a dick. 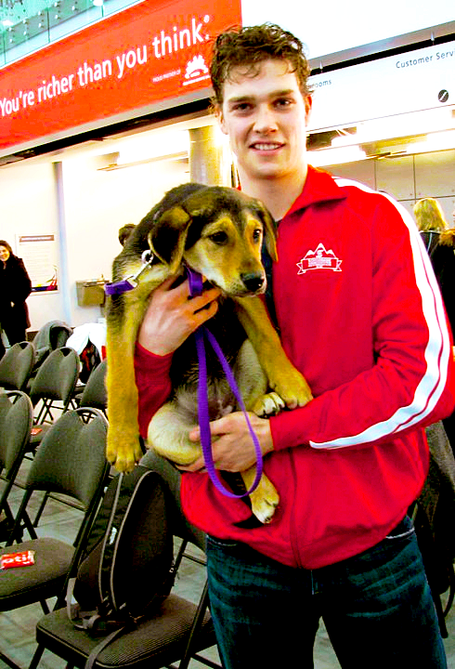 Yankee Canuck Bemoans: What's that? You like One Direction? Isn't that cute. Direct yourself into oncoming traffic.
This week saw another truckload of examples that when Vancouver does anything (or rather is involved with anything) the simple minds with access to a keyboard pile on. If any team's leading scorer gets flagrantly elbowed in the head, the team, coach, GM and fans would elicit a pretty obvious response, perhaps ranging from "um seriously?" to "hey I don't think that was appropriate, sportsmanlike response." But when it's Vancouver, you'd think there's no right to even speak. The simple minds say it's the winger's fault. The simple minds say we lost the moral high ground because we employ Burrows (comical coming from a team that pays Carcillo to not be on his knees in a bathhouse for dinner money). The simple minds gleefully hide behind vague concepts like karma instead of focusing on the player on the ice. If you're not embracing the hate after this week you never will.
But closer to home I'm taking the belt off for Sami Salo. Last night was not the best night for the defense. Hell this whole week wasn't ideal, but last night in particular the veteran looked painfully out of place against the speedy Avs. Altitude? Maybe. Hurting? Perhaps. Awful to watch? Heaven's to Betsy Samuel it was. Salo lumbered around for the first 40 minutes and that interference call midway through the second was a long time coming.
We know Salo is usually the calming presence on the blueline, especially when Edler wanders off into Ehrhoff land, but games like last night need to be few and far between. Especially with a banged up backend heading into a junkyard fight with whoever their first round opponent is.
Grandpa Kent Decries: Gotta be honest, most of my anger came out in my post yesterday about the knife in Daniel's back. Sure there's lots of little things about the Canucks game right now that bother me, all of which have been discussed here ad naseum. So I guess that just leaves the power play. What the fucking fuck? Sure they got a goal last night, and I understand the recent disorganization can be partially attributed to Daniel's loss from PP1, but come on Newell Brown, you need to get your ass in gear and fix this. It's not like you can't. You turned a lackluster power play on your arrival to one that almost took on a mythical status. Earlier this season, teams were literally terrified of going down a man against Vancouver, to the point that they altered the way they play the game against the Canucks physically to avoid taking a penalty. Since the Boston game, the power play's been embarrassingly inept What used to be money in the bank, is now something they should be paying us to watch. It's that bad. If the Canucks want to get another shot at the Cup this spring, the power play needs to be what fuels that run. It destroyed San Jose in the WCF, and it's subsequent disappearance in the Finals was one of the major reasons they didn't win it all. Change this, and I might go back to yelling at clouds instead of Canucks.