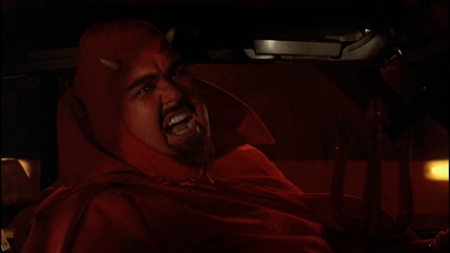 I've tried like hell to be shining a positive light on things surrounding this team. It's not that I'm delusional, or an apologist, rather I believe that there's always some silver lining there, and that with this fan base's natural proclivity towards the negative. We come by it honestly, it's years of losing that does it, things aren't always as bad as some make them out to be. I don't know how to try and paint a positive spin on the way the Canucks are playing right now. I want to try and reassure you all that they'll right the ship. But I watch this team play with such a lack of desire and urgency, and the rage starts to build. In spite of my profile picture, I am a pretty mellow, level-headed guy if you meet me. Right now? I'm pissed off, fed up and ready to explode. The worst part, is that the calm, level-headed dude inside me is still steering the ship, yelling at pissed off me in the back seat: "Oh yeah? So let's say we fire Vigneault with 10 games left! Then what? You honestly think that a slump is grounds for letting the coach go??? And put your damn seatbelt on, you fool!!!" It's then I realize that the brakes don't work. The car is accelerating faster and faster, angry me is yammering incoherently in the backseat, and now Satan is in the passenger's seat, laughing maniacally as the car speeds down the road. I look back at angry me, cursing me, Luongo, Nathan Lafayette and Barry Pederson. Satan is filling out my entry paperwork in advance so he can duck out early this afternoon for a round of golf with Bob Hope. I look up and see the bridge is out. What the hell am I going to do? The car smashes through the barricade...

It's quiet. There's no sickening sound of metal and glass smashing on rock. Just silence. The car is fine. Around me, nothing, just white. I'm pretty sure I'm dead, but this isn't hell. I step out of the car, leaving angry me arguing with Satan about how his contract is void because he didn't deliver all 4. I wander around in the nothingness for a while, in a slight panic that my life has seemingly come to rather spectacular end. I can see a small figure off in the distance, it's a child. I head towards it, and am surprised to see it's 7 year old me, wearing the Canucks jersey I got for Christmas. "Am I dead?" I ask my younger self. Smiling, younger me says "You're not dead, so don't worry. This is all just a dream". I'm puzzled now, and ask "A dream? Are you like the ghost of Christmas past or something?" I see him reach out and grab my hand saying "Come with me..."

The whiteness begins to take shape, and we're somewhere familiar. It's Rogers Arena. The Canucks are playing Chicago, and I look up and see Alexandre Burrows leap into the air to grab the puck, move in on Cory Crawford and score. The building erupts, and 7 year old me is jumping up and down screaming with joy. I am still confused, and I turn my younger self around and say "Yes, I know this happened. Why are we here?" 7 year old me hugs me and once again, the noise fades and we're in the white emptiness. Slowly the noise begins to return, and it's clear we're back in Rogers Arena again. I know exactly what's happening. There's one minute left. That familiar pain in my heart returns, almost as though it never left. The Bruins are 60 seconds away from raising the Cup. I turn and say "Why did you bring me here? I know what happened. I was there and it was one of the most difficult things I've ever endured. Why do I have to live through this again?" The younger me smiles and grabs a handful of popcorn, "You needed to be reminded that there are always going to be ups and downs with the Canucks. You've never stopped believing in them. You know when they're good and when they're not. I can't tell you what's wrong with them, but I know this is no time to give up hope. If they fail, they fail. That means it wasn't meant to be. It's fine to be mad with how they're playing. But don't give up hope. They're still the same team that almost won it all last year. They're just taking a different path"...

The hoots and hollers of the victors fade away and suddenly I am driving again. Angry me is gone, as is Satan. He did leave a card on the dash though, asking me to call him about a glitch in the wording of our contract. I really wish there was a simple solution. Something that could not only fix the issues this team keeps showing on ice, as well as alleviate our fears. Expectations are even higher. It's a natural thing, after coming so close. And like so many of us have done over the years, we've turned to the negative to shield ourselves against the pain of seeing this team we love stumble. Call it what you will, it's what we do, and will likely always do. I don't know about you. But I can't stop believing this team will turn things around. It may not happen tonight. Hell, I may be wrong. It's not going to change how I feel.

This game could be a blessing in disguise. I can feel a blowout coming, and it could go either way. The great part is that regardless of the outcome, the result favours the Canucks. A win can reawaken that spirit, a familar foe vanquished, and a chance for them to realize they are capable of so much more than they've shown. A loss, the wake up call they so desperately need. Another Burrows moment, more akin to the winning goal against Carolina where he snapped his stick symbolically. Someone will step up. The book on this Canucks team is far from over, and deep down inside I feel the best chapters are still being written.

Roberto Luongo gets the start tonight, and much like the team itself, gets a chance to turn things around. This is a good thing. You're gonna hear a lot of garbage being spewed about how Luongo is somehow afraid of the Hawks, especially in the United Center, but not only does he love playing there, and gets pumped up for these games, but has actually done better in Chicago than Vancouver against the Hawks. Chelsea Dagger is just a song, not some mystical chant that somehow vexes the Canucks. I get why Hawks fans think that, what with so many of them having already fragile psyches from enduring decades of Cubs-related misery. There's no point in really singling anyone out. To a man, they need to be on their A game tonight. Hitting, battling for pucks, blocking shots and playing tough, smart and most of all composed hockey will help them emerge victorious.

Looking for pretty? Nope. Angry is as angry does and when I get angry, I listen to Florida death metal kings Obituary. Bail on the team... I don't care. I believe.