It's going to be an abbreviated Buzz this morning, I've got a cold and I need to get to bed! Here are your links, images, bad Photoshops, out-of-context quotes and wild generalities for Thursday, March 15, 2012.

Weird game last night. I thought the new forward lines showed some chemistry and the PowerPlay looked deadly, but another porous defensive effort resulted in 5 goals against and a loss. The Raymond Experiment wasn't a total failure, as the Sedins put up a few points finally. Alex Burrows was incredible with Jannik Hansen.

Very cool infographic breaking down the Canucks' final 13 (now 12) games of the season: 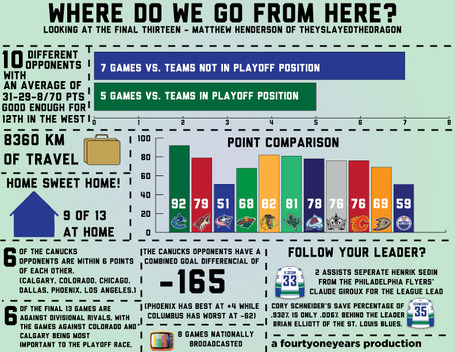 Why are the Canucks playing poorly lately? Because of YOU. [Legion of Blog]

Jamie McGinn scored with 0.7 seconds left to tie Colorado's game against Buffalo last night. The Avs ended up winning in the shootout, keeping their playoff hopes alive and well. [NHL]

The uncertainty of the upcoming CBA has forced the NHL to cancel next season's games in Europe. [Globe & Mail]

Hybrid icing has gained quite a bit of traction this week at the GM meetings. The rule is already implemented in the NCAA, and at least one coach thinks it's good for the game. [SBN]