Keep Calm and Carry On?

Share All sharing options for: Keep Calm and Carry On? 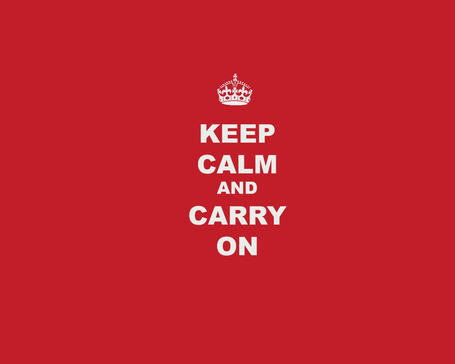 Many Canucks fans have no doubt found the team's recent stretch of play unsettling. Despite sitting near the top of the standings, the Canucks have not looked as dominant as their record indicates, and they certainly have not played at the same level as last season's President Trophy winning squad.

So the question becomes: is the team just struggling through a rough patch that it will rebound from or are there larger issues? In other words, should fans keep calm and carry on or should they panic?

Dan Hamhuis was on CBC's After Hours last night. In addition to coming across as a very well-spoken and likeable person, Hamhuis was very open in discussing the team's recent struggles and its mindset at this point in the season. I found his comments very revealing about where the Canucks are at right now and how they have been playing over the course of this season.

For those of you interested in it, here is full video of Hamhuis on After Hours:

And here is a rough transcript from the beginning of the interview:

Oake: This is the fifth time this season the Canucks have given up three or more [goals] in the third period. How do you explain it?

Hamhuis: I don't know. It's not a very good stat for us. . . . That's a little bit concerning. We're watching a lot of tape right now, we know the playoffs are just around the corner, so we're really trying to get our game in order for the playoffs.

Simpson: How do you compare the drive right now this year to last year? . . . Where do you gauge where your mindset is this year compared to last at this time?

It's been a bit of a different year dealing with those expectations. But our record's good this year, we're second or third in the league right now and we gotta take some credit from that and build off of that. [But] everyone's looking ahead a bit to the playoffs, kind of excited to get there, but we've got to get our game a little better here before then.

Hamhuis' comments point to the conundrum in which the Canucks currently find themselves. Expectations are so high for the team, that regular season is all but inconsequential to most fans. After all, the only way to top losing in Game 7 of the Stanley Cup Finals is to actually win the damn Cup.

Not surprisingly, the Canucks players are also looking ahead to the playoffs. The Canucks are obviously a lock to make the playoffs, and will likely finish second in the conference - guaranteeing home ice for at least two rounds. Given this state of affairs, it is understandable (though not acceptable) if the players are coasting somewhat down the stretch. As Hamhuis says, "Wins this year haven't been as exciting." What I am happy to hear from the d-man, however, is that this team hates to lose: "Losses are traumatic for us. We don't expect to lose."

All season, it has felt that the Canucks are on a mission and that the regular season is relatively meaningless in the big picture of what this team hopes to accomplish. Despite some less-than-stellar play, the Canucks still sit second in the NHL in points. This is a testament to the depth and skill of this team, as even a less than 100% effort often results in wins or loser points. What is troubling for fans, however, is that no-one wants the team to enter the playoffs not firing on all cylinders. A slumping Canucks squad could easily be upset in the first or second round if it is not bringing it's A-game in each and every playoff game.

And that is what this debate boils down to: are the Canucks just working out some kinks right now, so that by the time the playoffs roll around they will be ready to play at the top of their game? Or does the inadequate play of late reflect some deeper issues with the team?

Personally, I am in the "keep calm and carry on" camp. This team is too good to play this badly for too long, and has the depth to compensate for players who are struggling. If Roberto Luongo falters, we have Cory Schneider. The Sedins, who are suffering through their worst scoring stretch in nearly a decade, will surely find their scoring touch again soon. And even when the Twins do not light the lamp, our second and third lines are capable of picking up the slack (though certainly it is problematic to rely on this, as the team has had to lately). Importantly, as Hamhuis' comments point out,. the Canucks are fully aware of the problems are working to fix them. Finally, as pointed out in a Fan Shot posted by Sean a few days ago, many championship teams have struggled down the stretch before turning it on in the playoffs.

Over the past couple of games . . . there is the aura of "the slump" settling in around the club. Their defensive coverage [against the Dallas Stars] was a joke, and most of their shots were feeble wristers from the perimeter. We haven't seen the Sedins this ineffective in at least 3 years. Since you'll hear enough doom n' gloom over the next couple of days from the mainstream, I'll just say "don't panic". If the Canucks need to slump for a few games in order to find their best stuff again, so be it. Better now than next month.

So how are you feeling about the Canucks right now? Are you confident that the team will ride out this slump and be firing on all cylinders by the playoffs? Or is there legitimate cause for concern?