Whether you're feeling the effects of a big win and the celebration that followed, or you're just crushing as much caffeine as you can to make it through the day, everyone needs a good buzz in the morning. Here are your links, images, bad Photoshops, out-of-context quotes and wild generalities for Thursday, February 9, 2012.

First of all, our own Kenty Basky wrote something really important yesterday. Please go give it a read if you haven't yet.

Henrik Sedin's iron man streak of 552 games is in jeopardy. Our Captain blocked a shot in the 1st period against the Predators and was wearing a walking boot yesterday as a result. I'm sure we'll know more later today, but I'm not betting against Hank. [The White Towel]

Wait a tick, maybe the boot is just a fashion statement? [Legion of Blog]

If Henrik is indeed out, Daniel will get a chance to go solo. Hank won a scoring title without Daniel a couple seasons ago. [The Province]

"The Week in Canucks Tweets". I feel shame now for using "Bitz and bites" in my headline yesterday. In my defence, I usually write this before I've had any coffee. [Canucks Army]

Murph with a couple of possible Canuck trade targets. Bryan Allen is an interesting idea. [Sportsnet]

Tom Benjamin is bang on about the idea of trading Cory Schneider. He writes pretty much exactly what I've been telling everyone who asks me about Schneider: he's more valuable to the team that the return he would garner this season. [Canucks Corner]

Are you a new Canucks fan? Looking to get caught up on who's who before the playoffs? Harrison Mooney has you covered. [PITB]

[Feb 9, 1971] Rosaire Paiement sets a club record with four goals against Buffalo in a 6-3 victory. 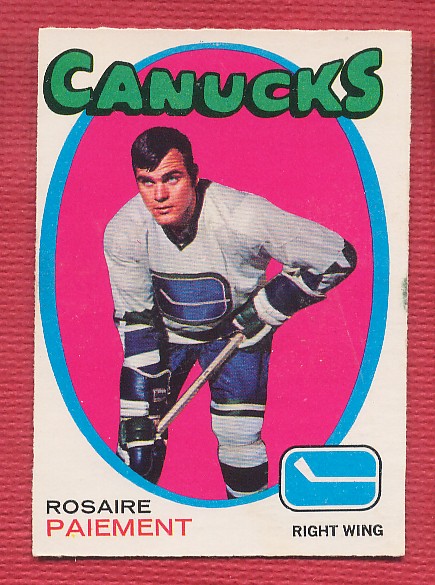 The NHL will make a "major announcement" today, and we already know it's that the 2013 Winter Classic will be held at Michigan Stadium in Detroit, where the Red Wings will face the Maple Leafs. Here's how it happened. [Puck Daddy]

Here's the live streaming video if you're early enough to catch it:

Ryan Miller made a statement with a shutout against the Boston Bruins last night, the team that has manhandled the Sabres and Miller as of late. [AP]

Tim Thomas is saying things on Facebook again. With the White House scandal still fresh in everyone's mind, this is ill-timed, don't you think? The focus for Tim Thomas and the Bruins needs to be on hockey right now, and this doesn't help. [PHT]

Shane Doan is cognizant of the fact that he may not be a Phoenix Coyote forever, despite his wishes. [Winnipeg Free Press]

Bourne gets technical: killing a 5-on-3, now with more MS Paint! [Backhand Shelf]

In an NHL players poll, Henrik Lundqvist and Pekka Rinne are tied for toughest goalie to beat in the shootout. [SI]

Winnipeg could be the site of a future Heritage Classic. Seems like a no brainer. [Winnipeg Free Press]

Cool story about a local guy here in Victoria getting an internship with the Edmonton Oilers after doing commentary for the Junior B Saanich Braves. He's a grad from the same communications program I took at Camosun College. [VicNews]

I came across a terrific blog in my travels yesterday, Hockey by Design. Being a designer myself, I've thought several times of starting a similar site. Glad somebody did.

Theory of Ice wrote a really great piece on the state of hockey blogging, and what it means to be a hockey fan who enjoys writing about it.

The great unfulfilled promise of the blogosphere was that here fans might wrench the great mass of hockey writing and hockey thought out of the grip of the NHL and its acolytes, that it might be a place where the incredible mad diversity of hockey people- not pros, just people- could express their own vision and experience of the game. The fan/amateur population is by far the largest demographic slice of the hockey world, and it is not right that we should be passive consumers of one League's representation of the game. The blogosphere could have set us free. It hasn't, but it could have. On some level, I feel as though I'm selling out.