Whether you're feeling the effects of a big win and the celebration that followed, or you're just crushing as much caffeine as you can to make it through the day, everyone needs a good buzz in the morning. Here are your links, images, bad Photoshops, out-of-context quotes and wild generalities for Tuesday, February 7, 2012.

Chuck Kobasew has been fined for his trip on Dan Humhuis while racing to negate an icing last Saturday. Strange that he was punished and Jannik Hansen was not for a similar play against Detroit. [CP]

You may remember that during Saturday's broadcast John Garrett alluded to the fact that he would be writing a column for Canucks.com on an idea he has for the shootout. Well, here it is! Does he defend goalies? Yes. Does he mention Honey Nut Cheerios? No. But his last line is a beautiful mess: "It could work. It should work and it would work." [Canucks.com]

Slightly misleading article title of the day: "Canucks not as good as they seem", by Joe Pelletier. If he's referring to the Canucks place in the standings despite their recent play, then yeah I guess they aren't as good as they seem. They may be in a bit of a slump, but I think overall they're about where they belong in the standings. I do agree with this point, though:

The Canucks need to play harder. They need to force the opposition to haul them down, hack and whack them. Their foot soldiers need to battle hard for loose pucks and give the opposition little choice but to take penalties against them.

The Stanchion dissects his 2nd career assist that spurred the Canucks to a late victory against the Avalanche. Look at how young he looks in his rookie card. [Legion of Blog] 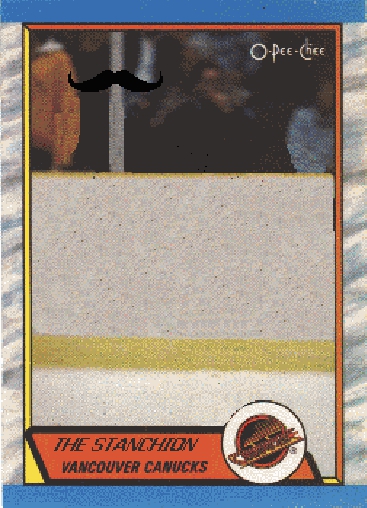 Jannik Hansen has been noticeably quiet for a while now. At one point it looked like he would put up 20 goals this year, but that ship las likely sailed. [Canucks Army]

The Chris Higgins saga continues, as he is suffering from a reaction to the meds he's taking to counter a third staph infection. This is definitely getting worrisome. [The Province]

Did you bet on the Super Bowl? See how you matched up against Alex Burrows. [Fort Nucks]

[Feb 7, 1996] Dave Babych appears in his 1,000th NHL game. Babych joined Ryan Walter and Pit Martin as the only three players to appear in their 1,000th game in a Canucks uniform. Babych became the 109th player in NHL history to play in 1,000 regular season NHL games.

A round-up of those put on waivers yesterday: Anthony Stewart, Zach Hamill, and Andrew Murray. [Cult of Hockey]

Sidney Crosby took a big step yesterday by skating in a full practice with his team. This whole situation still fascinates me. Suddenly, as if by magic, Sidney Crosby might not have a concussion, and he may never have had one! It makes the last year of media coverage almost seem like a dream. [TSN]

The latest Sabre to fall victim to an injury is...Lindy Ruff? The Buffalo coach broke 3 ribs in a collision with Jordan Leopold. Let this mark the beginning of the next great debate: when oh when will coaches start wearing full gear in practice?! [Sportsnet]

After the Ruff news broke, Aaron Ward shared a story on Twitter of nailing Scotty Bowman in the head on a PK drill.

Ken Campbell believes that Sam Gagner was incorrectly awarded one of his record-tying 8 points last Thursday. To be honest, I sort of thought the same thing when I saw the replay. [THN]

Tuomo Ruutu will likely be on the move from Carolina before the deadline, and possibly as early as this week. [PHT]

With the injury to Jimmy Howard, will the Red Wings be seeking some goalie insurance before Feb 27? [NHL.com]

Tragically, a 15-year-old collapsed on the ice Sunday night in a minor league game in Carp, Ontario and later passed away. [CBC]

[Feb 7, 1976] Darryl Sittler of the Toronto Maple Leafs sets NHL record with 10 points in a game.