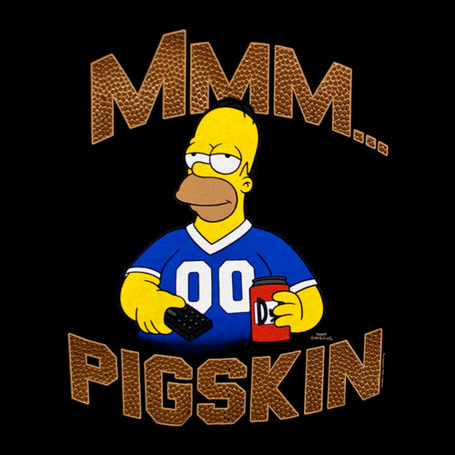 Or as we like to call it around here: The lesser of two evils. It's funny, isn't it. As Canucks fans some of us will have to swallow our collective pride and cheer for one of the cities that defeated the Canucks in the Stanley Cup. And while some might veer towards rooting against the Giants because 2 different New York based teams beat them for Lord Stanley's mug, Canucks fans with any integrity would obviously sooner take a Slap Chop to the throat than cheer for ANYTHING from Boston. Giants it is, then. I am sure that there might be cooler places to hang out during the game, but a) they won't have our level of Canuckcentric sarcasm; and b) I have beer and handcut nachos. So after the jump, someone who knows a lot about football will have created a compilation of stats you need to know. And I will have stolen them and posted them for your approval. It's a great day for football. How do I know this? I got a free flat of beer (my favourite brand) and this was playing in the grocery store when I was getting my supplies for tonight's chili. I damn near died laughing at hearing this in the produce aisle.

Gonna be honest with you, I didn't pay super close attention to the NFL this season. Maybe it was a side effect from June, but I watched at the most 3 or 4 games all season. But much like Christmas, Thanksgiving and the ritual sacrifices of poultry and other items to Jobu, Super Bowl is a tradition. Here's what TSN has to say about today's game.

It's almost game time, so I hope you're ready. Excessively salted and fried foods, alcoholic beverages for everyone. So, a couple rules before we get started:

1) The US Government and the NFL have shutdown nearly every single site that streams live sports, and will continue to do so throughout the game. Since we don't want no trouble from the law for yous guys, please don't ask for or post links to feeds here.

3) It is mandatory that you post (at some point during the day) what you're eating, where you're watching the game and what you're washing it down with. It's not necessary to post who you're cheering for since most of us are rooting for the kind of jaw dropping injuries that come along with one of the biggest sports spectacles in the world.