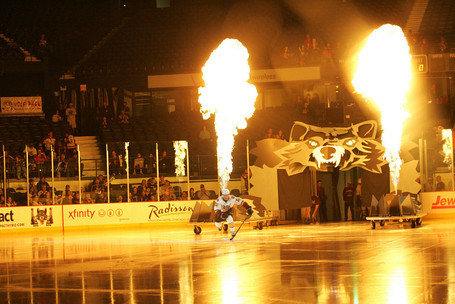 via chrisjerina.smugmug.com - Byron Bitz Loves Skating through this

Being a Chicago Wolves’ fan in previous years, the trade deadline was usually marred by feelings of dread "What is Atlantapeg going to do to make us worse this year?". Last year, it was to take away one of our leading scorers (Nigel Dawes) and our number one goalie who was playing his best hockey of the season (Drew Macintyre), with nothing coming back to the Wolves in return.

With the way the relationship with the Vancouver Canucks has gone so far, I was a bit more optimistic, and for the most part, I am pretty pleased. Gone are Sebastian Erixon, Taylor Ellington and Nathan Longpre, and coming to the Wolves are Byron Bitz and Andrew Gordon, which I view as an upgrade, I’ll break down my thoughts on the roster moves:

Taylor Ellington – Taylor is an ECHL level player who was called up for one game prior to being dealt into the Columbus system (ironically it’s not far he has to move as Columbus has their ECHL affiliate in Chicago), he was essentially a throw into the Pahlsson deal, so no huge effect for the Wolves in this deal

Sebastian Erixon – Sebastian is a talented D-man, a work in progress, and a potentially solid NHL prospect, however, he was having trouble getting ice time in the deep Wolves lineup. There were rumors that he was unhappy to start the season and his old team in Sweden was reeling and asking for his services again. We lose some defensive depth here, but this is a nice trade for Sebastian as he’ll likely get regular minutes in Syracuse (Anaheim’s AHL Affiliate).

Nathan Longpre – This one hurt a little bit, I was high on Nathan from the minute he debuted this season. He was in Canucks camp and eventually was signed to a contract by the Wolves for this season. He was just one of those guys you liked to watch on the ice, always skated hard, had seemingly pretty good hockey IQ and was productive with 18 points in 39 games. He was officially traded to the Springfield Falcons (Columbus AHL Affiliate) for "future considerations", which basically means "nothing", and it’s basically believed to be another throw in for the Pahlsson deal.

Byron Bitz – Canuck nation already knows why people love Bitz wherever he goes, but it was essentially a numbers game up in Vancouver and we’ll happily take him back in Chicago. With the amount of time he was away from the game he still needs a little more seasoning at the AHL level, but I think he’ll catch on as a 4th line regular somewhere next season, until then, I’ll enjoy watching #32 in Chicago.

Andrew Gordon – Coming back from Anaheim in the Erixon deal was Andrew Gordon, a nice sized winger who’s spent more time in the NHL this season (37 games) than the AHL (19 games). From what I’ve read, he’s a grinder whose style wasn’t quite working in the NHL but should fit in nicely in Chicago. Wolves GM Wendell Young is said to have been after Gordon for a few seasons now so that’s always a good sign.

All in all I feel like the Wolves are better coming out of deadline day than they were going into it. The AHL trade deadline isn’t for another week so there may be more changes coming. A little more scoring punch would do nicely for the Wolves in the likely upcoming playoff run.

Right now the Wolves are sitting in 2nd place in their division behind Charlotte by 3 points with a game in hand and 4th in the conference. They only got one out of a possible 6 points last weekend and this sudden cold streak snapped a four game winning streak that included two consecutive wins over division leading Charlotte.

Coming up this week – The Wolves are back in action tomorrow night against the San Antonio Rampage, then up to Milwaukee for a game Saturday night and then a game with Oklahoma City on Sunday.