Share All sharing options for: Canuck Brunch- Believe This! 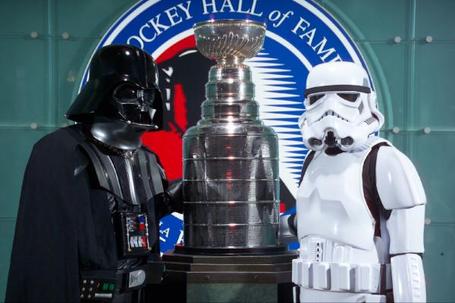 Apparently winning the Stanley Cup this year is gonna be a little harder than we first thought...

Much like that game back in January, that one was pretty much as billed, wasn't it? Two of the best teams in the NHL going head to head, both goaltenders making some jaw-dropping stops, the Red Wings looking like they'd keep the streak alive and then, much like they'd done for the last two months, the Canucks digging deep to find a way to get it to extra time. And the kicker? Ending Detroit's record breaking home win streak in the shootout. Some criticized the Wings streak because it included shootout wins, which the previous record holders didn't have at their disposal. I bet the Wings' fans would love to have an asterisk beside this one, eh? Not much time to ponder the win however as the Canucks are right back at it tonight in New Jersey. The Devils have really turned things around since turning their backs on the Cult Of Lemaire for good, and are in the midst of a massive dogfight to finish 2nd in the Atlantic Division, with that spot likely accompanying 4th in the East and home ice in the first round.

We don't get to see the Eastern teams a whole lot, and while sometimes it's a blessing, this year from what I've seen the New Jersey Devils are playing some exciting hockey. Ilya Kovalchuk is back to playing like he's capable of, future Canuck Zach Parise is having another great season and they look to have a real solid future from rookie Adam Henrique. Oh, and there's that Martin Brodeur guy. He may not be the same goalie he once was, but he's still pretty damn good. They also feature in their lineup a couple former Canucks: Johan Hedburg and 'Death To Scoring Chances' himself, Steve Bernier.

New Jersey was a total Jeckyl & Hyde last season, new head coach John MacLean winning just 9 games in the first 33. After trading captain Jamie Langenbrunner, the Devils cranked it up after Christmas and went on a 22-3-2 run deep into March, and it looked like they would come through with one of the most dramatic turnarounds in NHL history. They faded down the stretch though, and missed the playoffs for the 1st time in 14 years. This year, coach Peter De Boer has his team playing a style that's not quite as defensively stifling (read: mind numbingly boring) as his predecessor. That's a good thing for the Canucks, as they'll likely find a little more room to move out there than past clashes against them. They definitely want to keep this one in regulation however, as the Devils have won a mind blowing 1/3 of their games in Gary Bettman's Super Awesome Happy Fun Time Skillz Competition™.

Our pal Harrison Mooney at Puck Daddy was wondering this morning if Alexandre Burrows' stick breaking gesture was 'showboating' and one of the reasons he's so despised around the NHL. I would suggest there's not a player out there who wouldn't have done something similar or worse in that exact situation. Why shouldn't he celebrate? They did what others failed at. It was a HUGE win. If you start getting chastised for the occasional, appropriate considering the situation celebration, you run the risk of becoming the NFL. The Canucks are usually very business-like. They know what they need to do to get another shot at taking it all. And by God, if they wanna celebrate a big win, I say let them. Haters gonna hate. And Wings fans? Pictures speak a thousand words. Seriously though, emotional loss? Sure. But you're no Carrie Underwood, lady... 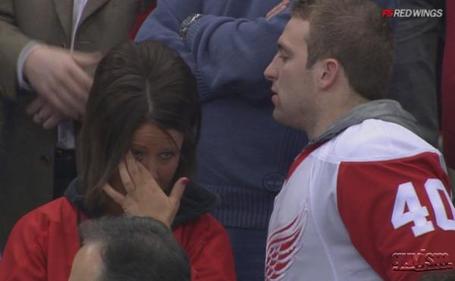 First off, congratulations to Chicago Wolves Captain and fan favorite Nolan Baumgartner on his 1000th professional game. Sure he's only had a handful of those in the NHL, he's always been a solid performer. As a Kamloops kid, Baumer was one of my favorites to watch during his time as a Blazer... While the Los Angeles Kings picking up Jeff Carter from Columbus yesterday may have been the biggest pre-deadline splash, the Kings being willing to put their captain Dustin Brown up for trade may end up being a bigger deal than the Blue Jackets trying to move Rick Nash and his massive contract. Brown is a solid 2nd liner with good defensive skills and a steal with 2 more years left on a $3.175 Million contract. The Canucks are apparently very interested in him, and he would be a great fit on the team, even with his downsides (dives more than the entire Canucks lineup combined, has a propensity for hits that cross the line)... How about those Winnipeg Jets? They've certainly taken advantage of Washington's latest stumble and vaulted past them to the top of the Southeast Division, good for 3rd overall in the East and if the playoffs started tomorrow, a home ice advantage in the first round. Making the playoffs will go a long way in creating their own identity and shaking off the last remnants of the Atlanta Thrashers, who had a grand total of 4 playoff games in their history before the move... As far as the trade deadline goes, this one may be a bit of a bust, but I will say this: If Pierre Gauthier trades PK Subban to the Boston Bruins, he should be fired. What a brutal betrayal of their fans it would be to send the annoying yet highly skilled Subban to their divisional rivals and mortal enemies. It would be like sending Kesler to the Blackhawks (yes I know they're not in the same division, the NW ain't what it used to be, alright?). Absolutely unacceptable, if you're a Habs fan...

KICKASS METAL SONG OF THE DAY

While they never had the kind of impact on the metal scene that fellow Quebecers VOIVOD did, DBC (Dead Brain Cells) were still a pretty damn solid band in their time. They're best known for this song, that saw them get a rebirth a few years back when it was used in a Fido commercial.