Now that was a game! As much as I'd like to write all about it, it's late and I need to get to bed. Besides, since there was sort of a pretty significant streak on the line in Detroit, everyone, their dog, and their dog's fleas are writing about it. Read up on the aftermath, plus a bit of NHL trade news, after the jump.

Check out the stills from last night's win. [Canucks]

This will definitely go down as one of the games of the year, despite the refs' best efforts. [The Province]

I love this quote from Henrik Sedin on playing Detroit: [Vancouver Sun]

"It was awesome...that team over there, they really invite you to play good hockey. There's no cheap shots, nothing like that. You play good hockey, go up and down the ice, there's scoring chances, hits - everything I think you want in hockey. And the atmosphere tonight, with everything that was on the line, it was fun."

David Booth's family was in the crowd, and his brother was dressed as a Green Man! That's his sister on the right, who basically looks exactly like her brother David, except with long blonde hair. Wait... [Twitter] 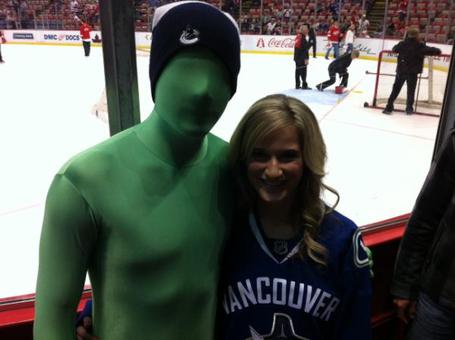 You may have recognized Burrows' celebration after his beautiful shootout goal. [Puck Daddy]

Is Vancouver's win last night tainted because Pavel Datsyuk wasn't in the lineup for Detroit? In a word, no. [Canucks Army]

Did this game alter the landscape in the Western Conference? [Backhand Shelf]

Who is Herb Bagel? Another appropriate title for this blog would have been: Harrison Mooney has too much time on his hands. [PITB]

How about Steve Ott? Or maybe Cody McLeod? [PHT]

Is Roberto Luongo on Twitter? The Stanchion investigates! [Legion of Blog]

[2003] Brendan Morrison was named NHL Player of the Week for the period ending February 23rd.

With Antoine Vermette and now Jeff Carter gone from Columbus, is Rick Nash the next to go? [CBC]

Yesterday PK Subban was involved in his fourth altercation of the season with a teammate in practice, this time with David Desharnais. Either this is good competitive battle, Subban is such an exceptional pest that he infuriates his own teammates, other guys really just don't like him, or a bit of all of the above. [Sportsnet]

Attention: the Winnipeg Jets now lead the Southeast Division. They might not just make the playoffs, they might be a top 3 seed. [PHT]

Jonathan Toews was involved in a minor car accident on his way to the United Center yesterday. [National Post]