@dstaples I think D. Sedin would have 7-9 fewer EV points this season if he got 50% o-zone starts

Now, over the last week, I have gone a little Malhotra-crazy. From Nucks Misconduct, to the White Towel, to Canucks Army, to the Legion of Blog, I have brought up on pretty much every Canuck-centric outlet I write for that Manny Malhotra sets up Daniel and Henrik Sedin, putting them in a position for success.

So what does that say about Daniel Sedin? Well, according to the tweet above, Daniel Sedin is helped at even strength by 7-9 points thanks to his crazy offensive zone start rate.

David Johnson, over at Hockey Analysis, begged to differ. He went back through the play-by-play charts and found 7 points that were scored by Daniel Sedin 40 seconds after an offensive zone faceoff and concluded:

But for the sake of argument, let’s say we can directly tie all 7 of those points to being a result of offensive zone faceoffs. Also, for the sake of easy math, let’s assume his OZone% is 70% (it’s actually closer to 80%). So, on 70% OZone starts he scored 7 goals. If we reduce his Ozone% to 50% you’d naturally think you’d lose an equivalent portion of points so he’d end up with 5 points instead of 7. Net result, Daniel Sedin’s offensive zone start bias has accounted for just 2 additional points so far this season.

I'm not sure if I buy that argument.

Here's why: It may sound inconsequential when talking about even strength points, but I graphed out NHL powerplay success rate from the post-lockout years: 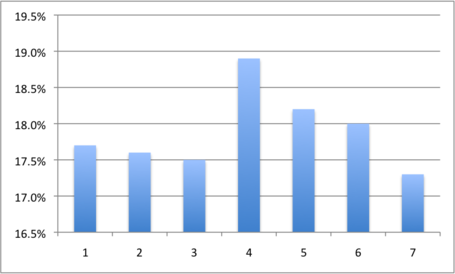 What's with the big spike from Year 3 to Year 4? Well, that was the year that the NHL amended Rule 76.2:

When players are penalized at a stoppage of play so as to result in penalties being placed on the penalty time clock to one team, the ensuing face-off shall be conducted at one of the two face-off spots in the offending team’s end zone.

When all the faceoffs were moved to one zone prior to powerplays, NHL teams were clicking on the powerplay at a high rate that has since taken the NHL years to adjust to (this seasons rates are notably lower, however).

Does a 70% zone start rate make a visual difference to a 60% zone start rate? Over the course of the season, you may be looking at a 3 or 4 point swing, which is impossible for the eyes to see. The other caveat with zone starts is that coaches are now using their most offensive players at one end, if not as exclusively as Alain Vigneault does.

I think zone starts can help a scorer, but you can't put anybody in the offensive zone 7 times a night and expect some assists. They still need to be good hockey players to put points up. Perhaps we may have overstated the effect, but I wanted to bring up the powerplay rate point because it's a visual indicator into how much help exclusive offensive zone starts can get your most talented stars.