I got into another Twitter debate on Cody Minutes v. Manny Minutes today.

I guess doing research that shows that Hodgson scores at a higher rate when he plays 14:28 or less isn't enough to satisfy some folk. The important thing is that Alain Vigneault clearly doesn't know how to run a hockey team because Cody Hodgson is so talented.

Obviously, nobody would prefer to put Hodgson on the ice in lieu of Ryan Kesler or Henrik Sedin. Even as a second line winger, the Canucks' current set-up of Kesler-David Booth-Chris Higgins drive play like no other line on the team can do.

I tallied up every Vancouver Canuck 5-on-5 situation from January 1st on (although timeonice.com skips the Phoenix game for some reason. The numbers didn't want a part in that one) and Hodgson has played 169.5 minutes to Malhotra's 139.

Check out where both players have been sent out for faceoffs since January 2nd against San Jose:

The O- and D-Usage rates imply the percentage of total faceoffs that both players have been sent out for in that situation. So Malhotra has been out for 58.3% of all Canuck defensive faceoffs since January 2. Hodgson has seen 77% of his starts in the offensive zone relative to the defensive zone.

Using possession metrics from timeonice.com, I calculated that Hodgson has been out for 21 more shot attempts against his own net than the opponent's, while Malhotra has been out for 48 more against his own net. That makes it seem like Hodgson's been the better player, but when you adjust it for both minutes played and offensive zone starts, you'll find that Malhotra is actually a plus player.

If both players had equal zone starts at either end, Malhotra would carry the play much better.

Finally, check out these graphs: 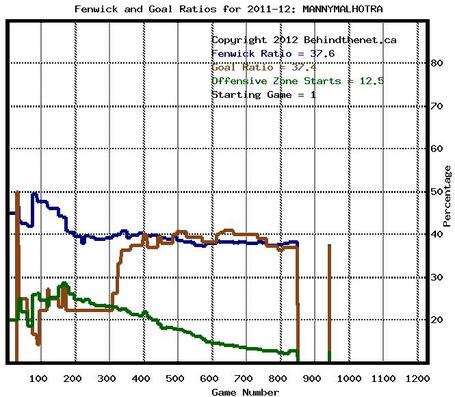 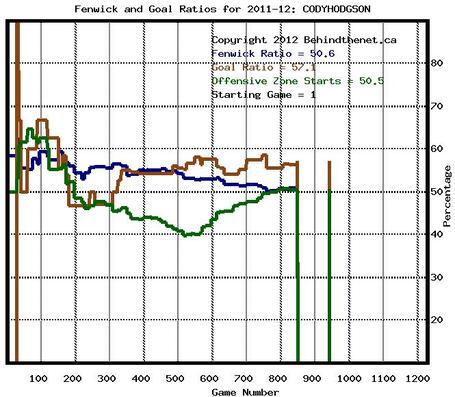 Since Game #572, which was the first the Canucks played in January, you can see Hodgson's zone starts creep up towards 50. Keep in mind he had a good month in box cars but the team's possession rank dwindled. His Fenwick rate (shots and missed shots) dwindles while Malhotra, dipping from about a 25% rate to just under 15% now, has kept his Fenwick rate relatively steady despite this.

If you want to give Cody Hodgson more minutes, go right ahead. But don't take more seconds away from Malhotra, is doing a damn good job on the Canucks' fourth line, or whatever you want to call it (I prefer to call it the 1st Defensive Line).