First there was Dan Solo, now Booth Skywalker. My collection of Canucks/Star Wars characters is expanding. I'd love to hear your suggestions in the comments. Maybe Byron Bitz as Chewbacca?

As was reported yesterday, Mike Duco has been reassigned to the Chicago Wolves, but don't think this is the last we've seen of him. [Canucks]

Duco's demotion signals the return of Chris Higgins. AV plans on starting him on the 3rd line and easing him back into the lineup. [The Province]

"When Chris got sick he was playing with Ryan and Dave and I thought that line was coming along," said Vigneault. "But I want to pace his minutes a little bit more here considering what he's gone through. He probably won't see a lot of penalty killing or power play time."

Tough break for Dale Weise. He was all set to return to the lineup, before taking a puck off the nose yesterday in practise while skating on the 4th defensive pairing with Alex Sulzer (you read that right). It's unclear whether he would have played anyway with the emergence of Byron Bitz this past week. [Vancouver Sun]

Ben Kuzma with a few points to ponder, touching on Cody Hodgson, the Andrew Alberts/Aaron Rome pairing, and the competition brewing between Mike Duco, Dale Weise and Byron Bitz. [The White Towel]

Linesman Mark Wheler wants Kevin Bieksa to back that ass up. [PITB]

Thomas Drance talks about how good David Booth has been for the Canucks, and if the percentages are any indication, he's only going to get better. He's got more power moves than @DadBoner. [Canucks Army]

If the Canucks acquired Rick Nash, he'd be in for a bit of culture shock. [Legion of Blog]

Also from the Legion, j.Bowman stumbled across a few of the Canucks' Valentine's Day cards: 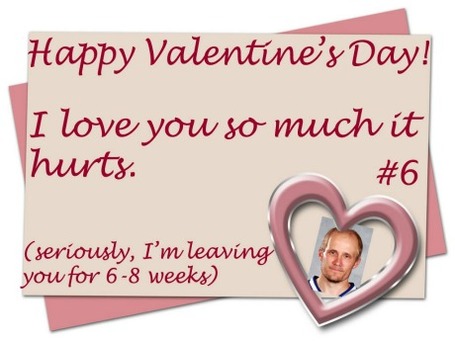 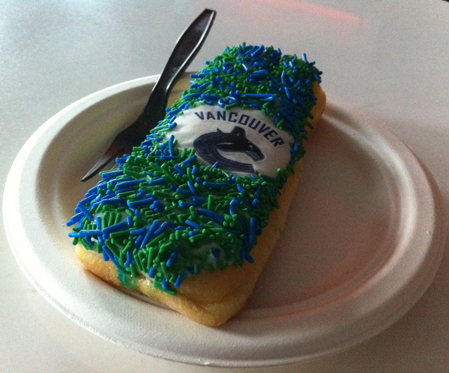 The Red Wings pulled off the unthinkable, winning their 21st straight game at home. All the other teams in the West can do is pray they're peaking early. [NHL]

Steve Ott is in awe of the achievement, even though he hates being on the wrong end of it:

"It's incredible, it truly is...Twenty-one games in a row at home, let alone five in a row at home, is amazing. It's a tremendous accomplishment for their organization. It completely [stinks] to be on the other end of it watching them do it against our team. It's disappointing [and] disheartening, because we wanted to be the spoilers."

The Predators handed the Blackhawks their 9th straight loss last night, on the strength of a big game from Ryan Ellis. [TSN]

No surprise the Preds beat the Hawks, considering they are the Stanley Cup champions. Hold up! Waaaaait. This is bound to work out about as well as Vernon Davis' SuperBowl party. [SB Nation]

In a clash of Eastern Conference titans, the Rangers shutout the Bruins last night, a team which Brian Boyle hates with a passion. [CSNNE]

Defenceman Johnny Boychuk has re-upped with the Boston Bruins on a 3-year deal. [Kukla's Korner]

Scott Gomez got in a shouting match with one of his coaches in practise yesterday, and of course if you're the Montreal media, to you this means he's "lost his will to play". [CBC]

Ales Hemsky is seeking a long-term deal, if not with the Oilers than with someone else. [Sportsnet]

All of a sudden, Rick Nash is legitimate trade bait. How did this happen? [Puck Daddy]

Much to the chagrin of those who live for trade rumours, Tuomo Ruutu will miss three weeks with an injury. GM Jim Rutherford claims this will have "no impact" on his contract situation. [Canes Now]

Meanwhile, Andrew Hirsh believes it changes everything. [The Hockey Writers]

In a recent Sports Illustrated poll, Phil Kessel and the Sedin twins were amongst a few of the players voted easiest to intimidate. The Sedins have scored a lot of points for two guys who apparently can't stop shaking in their skates. [Backhand Shelf]

Over at DobberHockey, Jeff Angus reviews Behind the Moves by Jason Ferris. I've been wanting to read this book for a while.