It was a night of rare goals in the NHL. Not only did defensive specialists Max Lapierre and Manny Malhotra each pot one in Vancouver's 5-2 win over Minnesota, but out East we saw Chris Phillips score his first two of the season for the Senators, and finally, FINALLY Scott Gomez lit the lamp after going goalless for a full year and five days. 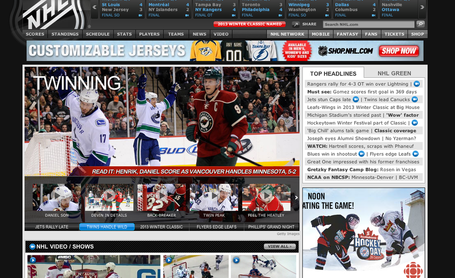 Henrik Sedin did indeed play last night on his bad foot, and ended up scoring off a sweet dish from...Byron Bitz!

Hank says he actually felt pretty good once the game got underway. There's a good quote from Bitz that points to perhaps the most underrated part of both Henrik and Daniels games: their durability. It's not as obvious as dropping the gloves, but there are very few players who play as often as they do, not to mention at the level that they do. [Vancouver Sun]

Did you notice Kevin Bieksa throw his glove at Cal Clutterbuck last night? [Legion of Blog]

Maxim Lapierre now has 7 fights and 6 goals on the year, inching ever closer to that 10 goal / 10 fight plateau. [Hockey Fights]

Rank the Canucks in last night's win over the Wild. [The White Towel]

A really interesting take from Ed Willes on the Luongo/Schneider situation, from a bit of a different perspective. [The Province]

Awesome video by The Stanchion and j.Bowman, "Sh*t Canucks Fans Say". This IS the year!

Is Luongo's poor record in Minnesota all on him, or does the team just usually play like shit at the Xcel Energy Centre? [PITB]

If you haven't noticed, the Canucks are pretty much unbeatable in 4-on-4 overtime. [Canucks Army]

[Feb 10, 1981] Winger Tiger Williams and defenceman Kevin Mccarthy are both voted to the Campbell Conference Team for the NHL All-Star Game held at the Los Angeles Forum.

Wait, WHAT?! Watch the magic happen:

Chris Phillips played his 1,000th game for the Senators last night, and scored his first 2 goals of the season! [CBC]

5 reasons to be excited about next year's Wings/Leafs Winter Classic. [Backhand Shelf]

The Conference Board of Canada has found that our great nation could support a maximum of 9 NHL teams. [CBC]

Just in case the 8+ hours of coverage on deadline day for what will end up being a handful of meager trades wasn't enough, TSN will also air a COUNTDOWN to a show that is essentially a countdown in itself. [TSN]

7 defensemen that could be available on deadline day. Spoiler: Hal Gill is #1 and Bryan Allen #2. Man, that TSN special is going to be worse than Chinese water torture. [Puck Daddy]

One of the more legitimate names that could be available is Ales Hemsky. [Kukla's Korner]

Bret Hull with an honest — and I would say accurate — assessment of the Dallas Stars: "very generic". [PHT]