In Loving Memory Of My Father, Andy Zandberg

Share All sharing options for: In Loving Memory Of My Father, Andy Zandberg 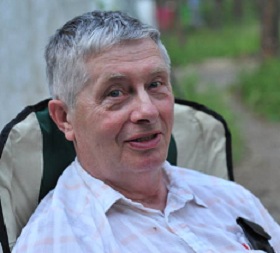 Very early yesterday morning I received a phone call from my little sis in Salmon Arm informing me that our dad had passed away. A sudden heart attack while he was taking a walk. I am still in the shock phase and cannot sleep. So, much like I did with my grandfather's passing months ago I am going to use NM as a platform to talk briefly about my father, Andy Zandberg and to honor him.

My dad had a terrific personality. He was a prankster with a great sense of humor but also a very deep, thoughtful man. A real charmer back in the day too. I remember that. I can also remember him sneaking up on us with the water hose and blasting us kids with cold water in the summertime. He loved hiding around the corner and then jumping out and scaring the hell out of people. In the early evenings he would read, snooze and watch the news religiously (News Hour with Tony Parsons, remember?) and then gripe about the state of affairs with my mom. When he slept, dang he snored loud. You could hear him from every corner of the house!

My dad had the ability to drive the old Cutlass Supreme and at the same time reach his arm over the driver's seat to give us naughty children a smack in the back seat.. I remember. He was so thrifty too. He knew how to save money. He worked so hard on our hobby farm with the cows and the crops so that all seven of us had food to eat. Picking spuds...for $5 a week. That was our "allowance". But that was enough money for someone not even in their teens yet, plus you don't argue with a cheap Dutchman. I loved it when he'd let me / teach me how to drive the tractor from the house to the field and back while we all loaded up the wagon with hay or crates of potatoes. That always made the work worthwhile.

Dad got me into hockey at a very young age. In the late 1970's it was Leafs games on Hockey Night In Canada. So: Salming, Sittler, Tiger and Palmateer. That is why I still like the Leafs (and Mats Sundin, obviously). He got me into wrestling. Back then it was All Star Wrestling. From birth he and my mother got us kids into music. They always had it playing, nice and loud at times too. Classical, CCR, ABBA, Elvis, Johnny Cash, Prokofiev (lots of classical actually). Very eclectic. Dad would sing out loud and/or wave his arms like a conductor when got really into it. So awesome. A very fond memory.

But the greatest memories of my father are the recent ones. The ones where we

were both adults. You see, at these times he was still dad, aka "the boss" and I was his son, but we could engage in adult conversation and get to know each other better. And that we did. It was healing to be able to tell him that I was sorry for being such a pain-in-the-ass teenager, and him saying that sometimes he was a little too hard on me. That was all in recent years. I am 37 years old now. The best moment was when he told me a few years ago that he was proud of me. That is something a son wants to hear from his father. He may have told me that earlier but I had no recollection of it. It was from that point to today that we had the strongest bond that we ever had. A bond that I didn't even know was possible.

And life comes full circle. Now I tease my little son Liam like my dad used to tease me. I am going to be open, honest, firm and fun with him like my father was to me, through good times and bad times.

Death can come so suddenly. I am still in shock but this is breaking me down now. I write this stuff not only to honor my father and to vent. I also want to encourage all of you who have read this far to build / maintain a relationship with your family. Don't put it off because life is so busy. Don't do that. You don't want to live with that regret should death occur. I am so thankful that I don't have any regrets about my dad. Well, I am sure I will think of something soon but am not at that stage yet. I just wish I could see him again. The last time I saw him was this past Christmas when our whole family was together for the first time in 7 years because we are so scattered. The minute he got to Kamloops he picked up a hockey stick and starting playing with my nephew Caleb. I was impressed that at his age, and having been through successful cancer treatments and past heart issues that he still had that playfulness in him.

I know I probably have your condolences, so more then offering them in the comments section I encourage you to share your own stories. Totally up to you. We are a community here after all.

If there is a heaven my dad is there. He was a very devout christian and he took care of and loved people. He was a good man and I can say that and mean it 100%. Rest in peace, Dad. I will miss you always.

He was big into western films and old country music as well, so I will end this tribute with some Johnny Horton, one of his favorite tunes: